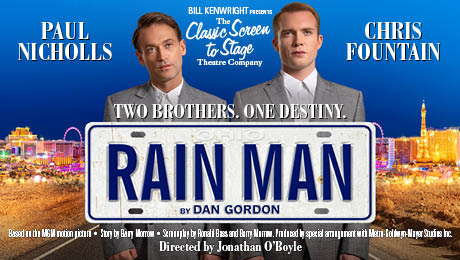 A copycat adaptation that cannot escape the classic original's shadow.

When considering a film-to-stage adaptation, there are some genres that directors and writers would rather avoid. So when writer Dan Gordon and director Jonathan O’Boyle decided to adapt Rain Man – a road movie – they surely knew they were making a bold move. What is more, they were taking a risk in choosing a film that is credited with being highly influential in introducing audiences to autistic characters in cinema. In this production, we meet such a character in Raymond (Paul Nicholls), an individual with high-functioning autism who finds himself connecting with brother, Charlie (Chris Fountain), following the death of their father. With the original being moving, funny, and often times difficult to watch, the challenge was for Gordon and O’Boyle was to make it as impactful as it was over 30 years ago, while keeping the action fresh for a 2019 audience.

While the freshness is debatable, what you can say is that this production is indisputably loyal. From the opening song – The Dixie Cups’ “Iko Iko” – down to the almost line-for-line script, Rain Man is a mirroring of the original, for better or worse. The production is indeed very slick; Morgan Large’s design is glossy and flashy, and Fountain and Nicholls give solid imitations of Tom Cruise and Dustin Hoffman‘s performances. In seeing this performance, you effectively find yourself reliving the film from a different angle. Issues do arise when it comes to scenes that are, by their nature, not theatrical enough for the stage, such as when the fire alarm goes off and sends Raymond into a frenzied panic. Although these scenes are referenced, the action is omitted from the performance, and as a result chunks of the original story are left out.

Even so, O’Boyle’s direction is careful to be theatrical instead of cinematic, an important distinction in making the production successful. If there’s a missed opportunity in updating the representations of some of the characters (a presentation of autism that is more in line with how views have changed, female characters with a bit more depth), that was clearly not the priority of the production. Fountain and Nicholls give strong performances, but the danger of playing a performance so close to your predecessor is that you inevitably and unavoidably invite comparison. Sadly, in this case, Fountain’s performance does not have the charisma of Cruise and Nicholls’s lacks the subtlety of Hoffman. Even so, for imitations, they are are well done.

Generally, the same thing can be said for the whole show; for though it is perfectly serviceable, this Rain Man gives you little reason to see it instead of watching the film.