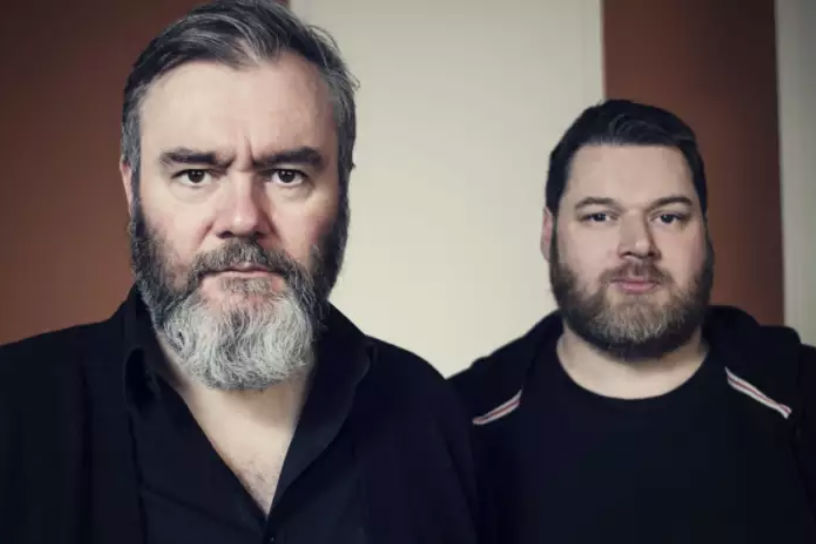 The magic of the musical partnership between Aidan Moffat and RM Hubbert has not been news to fans since the release of the magnificent Car Song in 2012. The pair’s shared preoccupation with the bleaker realities of life, such as romantic failure, sex and death, and their mutual tendency towards dry humour and self-deprecation mean that this collaboration continues to be a decidedly harmonious and fruitful one. Despite the repeated motif of relationship breakdowns in tonight’s gig at the Pleasance Theatre, it’s clear that the spark is still very much alive in this artistic pairing.

Support act Siobhan Wilson mesmerises the audience with her hypnotic, velveteen vocals, complimented by her sure-footed, alternating stints on electric guitar and piano. The saccharine, almost celestial purity of her voice contrasts beautifully with the lyrics’ interest in the mundane and with the power of some of her more dramatic instrumental work. Her versatile vocal range is showcased in songs like Incarnation, and her compelling Scottish ingenue stage persona is underlined by her charming, sensitive cover of French classic J’attendrai.

When the headliners arrive on stage, Moffat with tin of Stella in hand, Wilson remains with them to provide backing vocals, piano and cello. Her contributions provide balance and a feminine counterpoint to Moffat and Hubbard’s more rambunctuous, salt-of-the-earth, blokey energy.

Here to promote their new album Here Lies the Body, they open with their single Cockcrow, a haunting track about romantic disillusionment and vulnerability. Lyrically, thematically and musically, it’s everything fans would hope for. Moffat and Hubbert are self-aware about how established and ingrained their reputation for morbid navel-gazing and black humour is, referring often to how many of their songs are about personal failure and atrophy, the bleak introspection of both the songs and their on-stage banter peppered with wry witticisms and bathos. “Let’s celebrate Friday night with another song about the breakdown of a family unit!” jokes Moffat. Hubbert extrapolates to the audience: “You lot are my kind of people, getting f***ing miserable, preparing for the inevitable disappointment of the weekend!”

What is surprising, given how predictable some of the thematic concerns are, is how diverse and exciting the work on Here Lies the Body proves to be. Keening for a Dead Love opens with an unnerving warbling sample, before breaking into a rich, slick, textured soundscape. The distortion effects on Moffat’s vocals are accompanied by discordant instrumentals and powerfully jarring interruptions to the rhythm. It’s seriously impressive stuff when performed live. Another pleasing musical surprise is the jaunty, hedonistic release of Party On, musically more reminiscent of The Last Romance-era Arab Strap than much of Moffat’s more recent output.

Arab Strap’s David Jeans performs on drums, providing some dramatic turns and changes of pace. Throughout the gig, Jeans’ expertise is evident as he switches between the drama of Cockcrow, the militaristic march of Quantum Theory Love Song, and more jazz-inspired or demanding experimental work on tracks such as Wolves of the Wood and Mz Locum.

As delighted as the audience are by the songs, a similarly high-calibre level of entertainment is provided by the interactions between Hubbert and Moffat on stage. Their unpretentious, witty rapport recreates the feeling of a night at the pub with old mates, and Hubbert’s comic storytelling proves to be an unexpected highlight of the evening. Although the audience begin to grow a little impatient when these chatty interludes start to feel a bit dragged out towards the end of the gig, they are more than placated by a closing, tender cover of Vince Clarke‘s Only You and further satiated by the encore, Car Song.

Despite their jokes about all their creative work being aptly summarised as “sadness with a semi”, tonight’s gig proves this is a deeply exciting new chapter for Moffat and Hubbert. Old aficionados leave the Pleasance with their love reaffirmed and reignited, new fans leave intrigued to see what happens next.