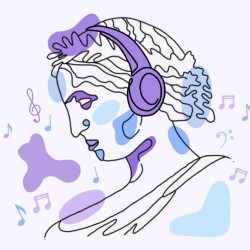 I’m not sure what to make of Antigone: The Musical… but then again, I’m not certain it completely knows what to make of itself. It’s billed as a comedy, and if they’d really leaned into that – making a farce out of one of antiquity’s most tragic stories – perhaps it would have worked. As it is, we get an incongruous mix of the humorous and the heart-wrenching, albeit wrapped up in some pretty decent songs from a large cast and on-stage band.

We’re greeted by a musical summary of the back-story, and it’s immediately clear that this is an irreverent adaptation. ‘I’ve got a shovel, and I’m leaving tonight’ proclaims Antigone, in defiance of an order that her brother’s body remains unburied on the battlefield. A sweet number between Antigone and her sister Ismene soon sours in the face of Ismene’s opposition to the burial plan, and the relationship between the two women remains a welcome focus of the narrative, as Antigone contemplates a horrifying fate. But in that more serious context, the radical reworking of the classical ending – without giving too much away, Antigone survives – was a little too much for me to get my arms around.

The songs are catchy, though. Someone’s Got To Be The Villain is entertainingly self-aware, while Hey, Dad! wouldn’t feel too out of place alongside songs from the likes of Oliver! There’s an echo of Les Mis too, with rebellion fomented in a tavern and a rousing song calling on the gods for aid, while the more thoughtful I’ll Grow draws a clever parallel between burying the departed and planting trees. There are some funny rhymes to enjoy as well, linking the extremes of Greek legend to modern-day tropes.

But there’s some passion lacking in the delivery. The choreography for a few key numbers simply involves walking back and forth across the stage, and when – towards the end – the audience is exhorted to join a revolution, it’s all done very politely. This ought to be a matter of life and death, a desperate struggle for Antigone and her supporters, and I never quite felt it that way.

In the end Antigone: The Musical could have jumped either of two ways, but didn’t commit to either. It’s not heightened enough to work as a bizarrely-themed comedy, but nor does it take the more heartfelt songs entirely seriously; one potentially moving number was greeted by giggles at the dance going on behind. There are some great tunes, clever lyrics and an interesting concept underpinning it all… but for me, it doesn’t quite come together.