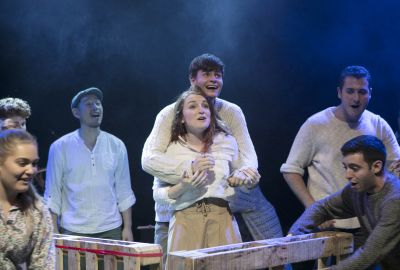 Scotland as a setting lends itself as the backdrop to an emotive and entertaining musical: the natural drama of the landscape, music traditions along with the fun and feistiness of its inhabitants. Here all of this is captured, as we follow the life of Evie McCormick who lives on a remote island. As a young girl, she dreams of crossing the sea and adventuring in unknown territory, but as she grows up feels the weight of her duties at home.  When she does have the opportunity to leave with her sweetheart, she instead chooses to stay, leaving her with consequent feelings of regret for the rest of her days. It’s a universal theme – whether to take the sensible, expected and safe routes, or whether to grab opportunities as they come, take risks and follow youthful dreams. As in life, it’s not straightforward. She marries well, both in material terms and in terms of her husband’s character, and they have a lovely daughter. But she does have to live with the nagging wonder of what could have been and carrying a torch for a lost love with whom she continues to correspond.

The basic plot is interesting, but the first half in particular is slow going – not in the story’s passage of time, but in the scripting. While the acting is mostly pretty good, more work on this to add depth and dimension to the characters and tweaks to dialogue would help really draw us in to care more about the characters. This is especially important as strong (although good) accents, no mics, and a relatively large venue make it tricky to catch all the lines for those near the back, which can cause audience disengagement if we’re not fully invested.

Three wooden crates make up the full extent of the staging and are used creatively, cleverly and elegantly to present many different locations. The design is excellent as the piece flows effortlessly between scenes, the large ensemble moving in sync with one another. Similarly, the musical harmonies from the group soar beautifully and hauntingly with some lovely voices being showcased (notably that of  Mary Laura Godby who plays background characters, but whose voice stands out). This doesn’t have memorable or singalong type numbers, but does offers an unusual musical theatre experience that encapsulates the heart of Scottish music.