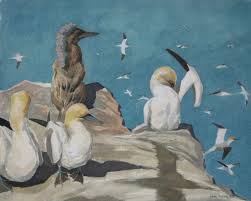 Aviary is an exhibition examining representations of birds in Scottish contemporary art. Upon entering the exhibition, held in the lower Academician’s rooms at The Royal Scottish Academy, one moves instinctively to the right where the title sign and information hangs. A fitting first work greets the viewer; Elizabeth Blackadder‘s jagged black and white Parrots, four of them tilted and arranged in a quirky manner on poles. Continuing anticlockwise to the artwork Aberdeen Ibadan Dronte Chook by Michael Agnew and Ade Adesina, a dodo large enough to jump out of the frame can be seen and fixes the viewer with its bulls-eye. Birds, landscape and nature fill the gallery space. An exhibition largely muted and monochrome, the first colour is to be found in Elspeth Lamb‘s Hyne Awa series – depicting a shocking pink sky above and blue down below, where the savageness of the painted badger manages to overpower the red kite under a full moon.

A quarter of the way around the exhibition, it becomes apparent that the artwork’s numbers are moving backwards from fifty. Did the curator plan to start at Blackadder’s #1 only to have the viewers retrace their steps clockwise to #2? This presents a beautiful pen and ink work, Bird and Plant by the late Jack Knox; redolent of Edward Lear with its simple composition and humorous air. The suggested curatorial navigation seems intentional given that the dodo appears as being a nod to Lear’s nonsense animals. However it is too late to circle back within the space, for opposite is the work of the prestigious female artist, Joyce W. Cairns. Not only has she produced the painting with arguably the most depth, Head Study from the Deadly War series, but on 28 Nov last year she was appointed the first ever woman to be Director of the RSA in its 193 year history. Initially unclear as to why the Head Study portrait was included given it conveys an image of a young girl soldier as opposed to any obvious bird motif, closer scrutiny reveals a long necked ornithological creature whispering in the girl’s ear. With eyes askance, the girl appears to be listening intently. In conversation, Cairns reveals that she is currently too busy settling into her new role to finish the new painting she started for this very event. Standing in front of Head Study she eloquently explains that its subject, the Bosnian War of (1992-1995) was, “like a merry go round where no-one was helping anyone, that this woman is expressing my feelings about the misery that that war caused, the unrest of the soul”.

Alongside this, a vast range of bird life is encapsulated in the drawings, sculptures, poetry and other media throughout the exhibition. Notably Eileen Lawrence‘s spacious Prayer Sticks, and Frances Pelly‘s soapstone trio depicting a subtle shrug of raven shoulders; touching hunger of sparrow young; and haughtiness of hen harrier. It is no wonder that one has a red dot (sold) at opening time.