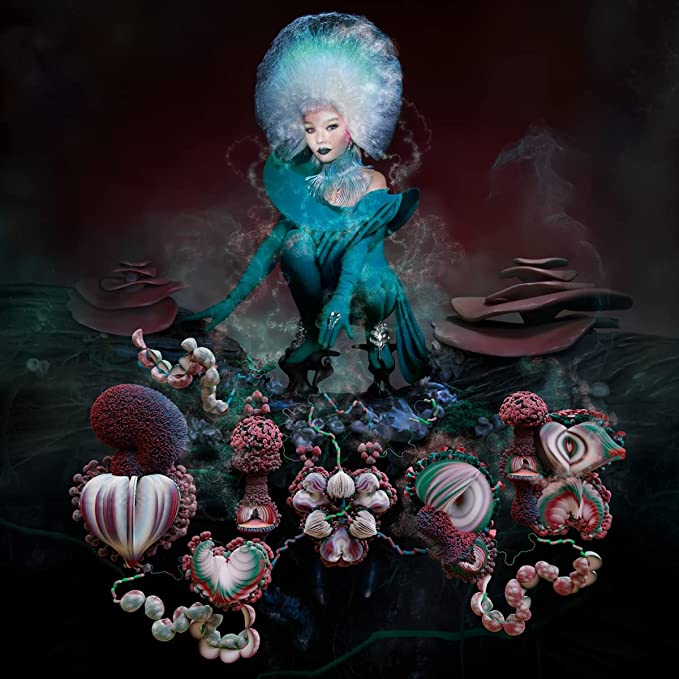 It has to be said, hopes weren’t high for the inimitable Icelander’s tenth album from many but her most diehard fans. I must confess to being left cold by Vulnicura,  Biophilia, and Utopia, finding them a little too self-indulgent (and ye gods, in the latter – the flutes! My ears!)

Things fared little better with the release of the first single, and the opening track here, Atopos, where Bjork intones, rather than sings, about echo chamber ways of thinking, as bass clarinets puff around and controversial Indonesian collaborators Gabber Modus Operandi pummel away on Black and Decker-esque percussion. The whole experience feels queasily didactic, like being lectured at a rave for Moomins.

This being Björk though, things are never quite that simple. Describing this as her “matriarchal” album, the themes of birth, growth and death are firmly planted. Mushrooms are a recurring motif, which makes absolute sense, given they thrive and grow in the dark. And of course, the recent loss of Bjork’s beautiful mother Hildur features throughout.

What’s most surprising here is both the warmth, and a nod to classical influences. Of course, lush orchestration has always featured, but here it becomes more apparent, almost like vignettes and homages. The most obvious elegy to her late mother, Ancestress, borrows a little melody line from Prokofiev’s Romeo and Juliet. The fragmentary Freefall seems akin to the thrilling minimalism of John Adams. And the murkiest track, Trolla-Gabba has a hint of Bernard Hermann in its cinematic intensity.

Admittedly, it’s not entirely consistent. The title track, as with Atopos isn’t terribly tuneful or memorable, and the wonderful Josiah Wise, aka serpentwithfeet, seems somewhat underused on the playfully pizzicato Fungal City.

There’s beauty elsewhere though. Mycelia and Sorrowful Soil are pulsating electronic tracks where layered vocals shimmer front and centre, as with her best work from experimental album Medulla. And the soaring swoon of Her Mother’s House, featuring glorious backing vocals from daughter Isadora, lets the music breathe, sigh and recalibrate. As with all good mushroom foraging, occasionally it’s possible to stumble upon something magic.