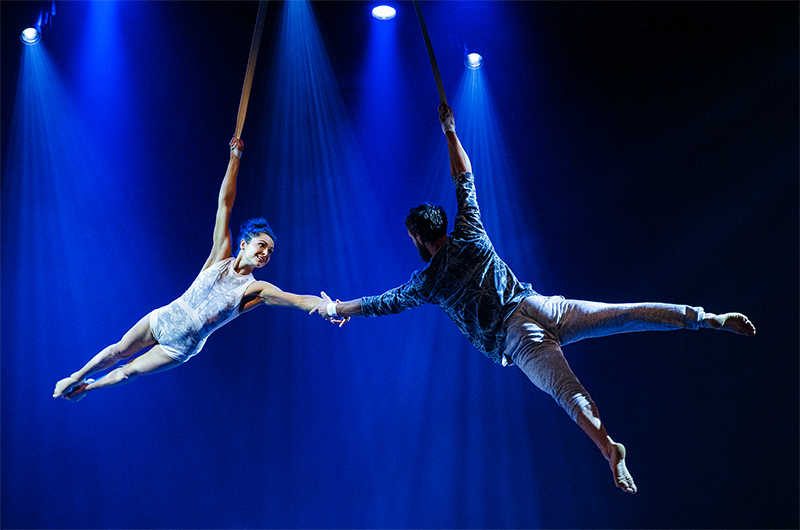 FLIP Fabrique serve up superior circus. Hailing from Quebec, they’ve become something of a regular fixture at Assembly Hall during the Fringe, and deservedly so. They combine acrobatics (on and off a trampoline), aerial dance, rollerblades, hula hoops, visual theatre, juggling, music and a healthy dollop of clowning – all with an arctic theme.

Their new show, Blizzard, plunges us straight into a snowdrift in the depths of a Canadian winter. We are crunching across the freshly fallen snow – we’re instructed to dress for winter – and then we have to navigate the ice. A live soundtrack from Ben Nesrallah on a souped-up piano (and occasional guitar) underscores the action, adding pace, momentum and eerie atmosphere by turns.

The acrobatic wizardry on show makes for a fabulous distraction from the incredible technical dexterity that makes Olivier Normand‘s production fly. The set pieces are impeccably choreographed, so we don’t notice that the stage is, all of a sudden, full of a giant bouncy mattress. The giant cube deserves a round of applause to itself. And though it’s imperative that all of this kit works, the performers wear the responsibility lightly. Physics-defying tricks and physics-conscious health and safety is an impressive combination.

The performers look like they’re having a ball – unless they’re involved in something particularly tricky. The company was set up by six friends who wanted to create circus with a sense of humour that they could be proud of, and their work continues to look as if they’re doing exactly that. It’s hard to know who has more fun: the guys who fling themselves through the air with dizzying speed, or the ladies who spin, are flung, and are mercifully caught. But William Jutras‘ flourishes are always met with ripples of audience delight.

This is exhilarating stuff. ‘You could tell everyone was on the edge of their seat,’ says Maddy, 14, with atypical teenage enthusiasm. Audience gasps abound and the team receive a standing ovation for a visually and physically stunning finale. Give them a few more runs to get used to manhandling all of their kit in a performing space that only just fits it, and this could be a 5-star show. Coolly brilliant and brilliantly cool.