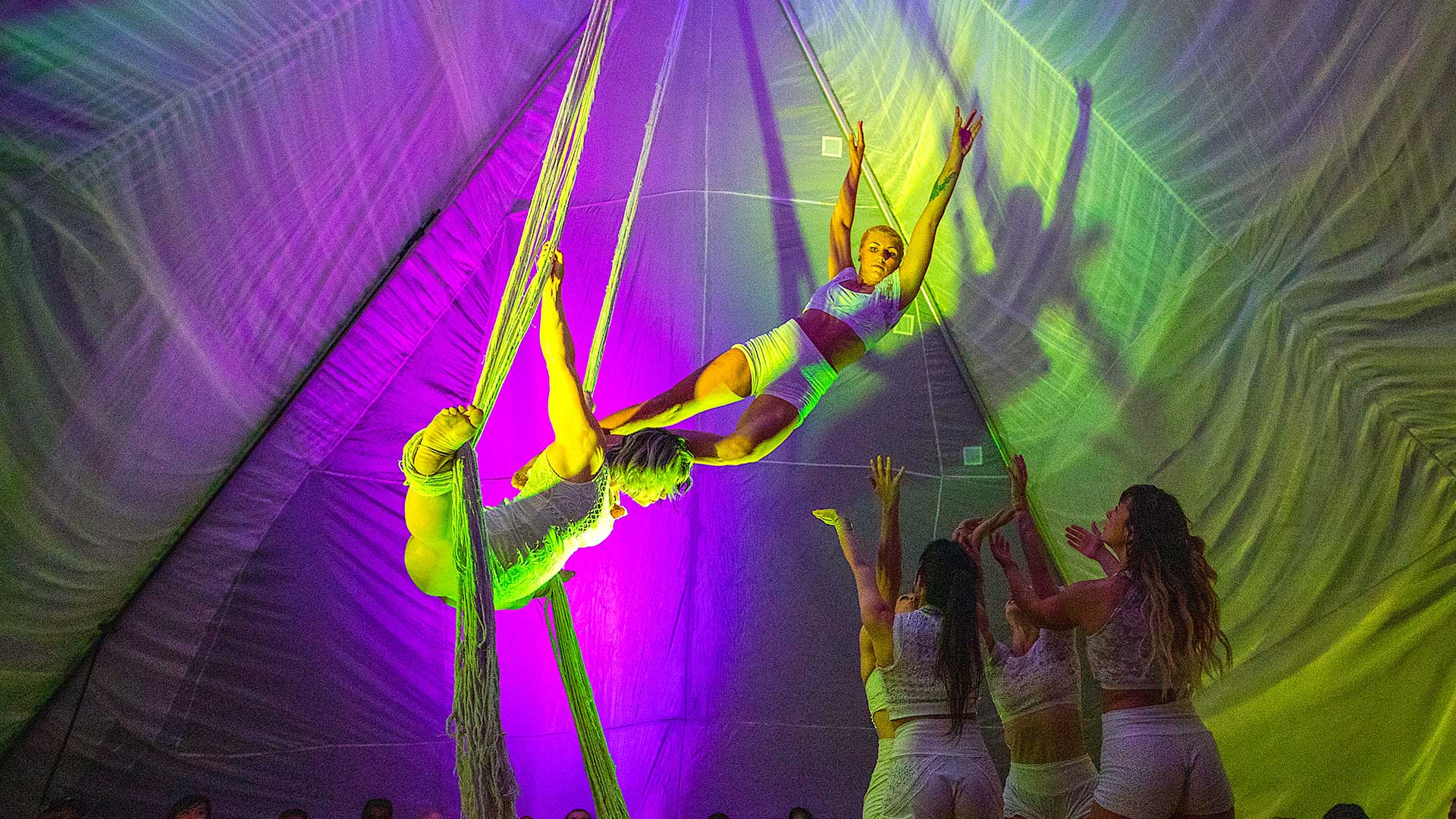 You’ll find Brave Space in Underbelly’s Circus Hub on the Meadows. The performance can be found in Beauty, one of the gorgeous spiegeltents, but you’ll spend much of the show in another tent altogether: a ‘safe space’ created when a parachute is hoisted aloft and then enfolds the audience, alongside the performers, in a joyous cocoon.

Aloft Circus Arts hail from Chicago and believe in making accessible circus that isn’t only about celebrating physical strength and artistry – though there’s plenty of that on show – but also in building empathy and creating experiences that all audience members can connect with. A brave space is one in which people feel not only comfortable and able to be themselves but able to grow in confidence and ability: a cracking premise for a circus show.

So the performers create their own – our own – brave space with this parachute. Pooled on the floor in the centre of the tent at the start of the show, the artistes balance and spin and fly, eventually raising it as high as the ceiling. Thus ensconced, we’re treated to a dazzling array of trickery: the Cyr wheel, trapeze, various aerial acts, hoops, juggling, acrobatics and more, all executed with an impressive amount of strength, grace and the sort of smile that fools you into thinking that these exploits are effortless.

The performers are all female and forge a lovely connection with the audience over the course of the show, helped by the proximity but also their gentle, non-intrusive ushering of us in and around the space. Unusually for a circus act, the audience themselves are invited to play a role, supporting poles from which the performers then rotate, hauling ropes from which they fly. It’s a brilliant way to bring this brave space to life. And there’s something wonderful about watching a maybe four-year-old boy helping an aerial artiste fly.

Because the audience are invited to sit and briefly lie on the floor during the performance, you’re encouraged to set your bags to one side. For anyone who’d rather have a seat, this is arranged. And as some of the performers are in higher risk groups, the audience are all handed face coverings as you enter the tent. (Though you could save the planet and bring your own.) A really varied demographic ranging from tiny children to older adults embraced this performance, all captivated throughout.

If all of this has’t sold it to you, you should also know that there’s a perfectly magical moment involving an aerial act and Antony and the Johnsons beautiful song Girls Can Fly. Have you ever watched an aerial act while lying on your back looking up? Here’s your chance.