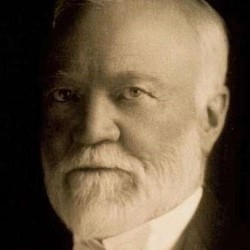 Biographic narrative reveals the inner contradictions of a self-made billionaire

A vivid and informative biography

You’ve probably heard of Andrew Carnegie – the American industrialist turned philanthropist, who gave his name to Carnegie Mellon University and New York’s Carnegie Hall. But how much of his life story do you actually know? This biographic play aims to correct that balance; we meet Carnegie as he reminisces about his life, during a fishing trip to the Highlands on the eve of the First World War.

Ian Sexon successfully captures Carnegie’s contradictions. Playing an American patriot, but of Scottish birth, his accent subtly changes with the context of the story being told – while his ever-commanding delivery invokes the spirit of the greatest industrial baron of his age. He’s given, as well, to expansive gestures, whether he’s acting out that fishing trip or exuberantly imitating Carnegie’s young daughter. It’s a bold move from director Andy Corelli to go so big in a small space, but on the whole it works – capturing the sense of a larger-than-life character, while also lending some variety and excitement to what could easily have been a very static production.

John Yule’s script is dense but not overwhelming, picking out key moments from Carnegie’s life to paint a picture of a driven man. The historical detail is fascinating: the rigours of long-distance travel in 1848 are evocatively described, as is Carnegie’s pride at becoming the family breadwinner at the age of just 15. Underpinning the narrative is a certainty in his own talent, and a belief that such ability should be rewarded. But perhaps the most telling scene details the notorious Homestead Massacre of 1892 – a story I’d never heard, but which demands to be told – when striking workers at a Carnegie steel plant did battle with a private army sent to evict them.

Biographies narrated by their own subject can seem hagiographic, and the lack of any balancing voice troubled me at first. But as time goes on, Yule achieves something subtler: letting Carnegie’s own words testify against him. The Carnegie he portrays deplores the bloodshed at Homestead, yet casually reveals his preferred approach was to ‘force the workers into starvation’. He celebrates America as the land of opportunity, even as he admits to cheating those he’s dealt with. He claims to desire prosperity for all – and it’s up to us whether we believe him.

But the script does suffer, I feel, from an unadventurous structure. Apart from the framing device of Carnegie looking back on his life, the story is told in chronological order; the scenes are colourfully described, but it still feels a little too much like an autobiography being read out on stage. A few moments of audience involvement do help break things up, but it’s only at the very start and end – when Sexon gets to portray Carnegie reacting to the events of his present day – that the narrative truly drew me in.

Still. the play lands undeniably well with an Edinburgh audience and, in the charming and historic setting of Panmure House, it has an almost site-specific feel. Overall it’s a vivid and informative biography, which left me keen to learn more about its subject.