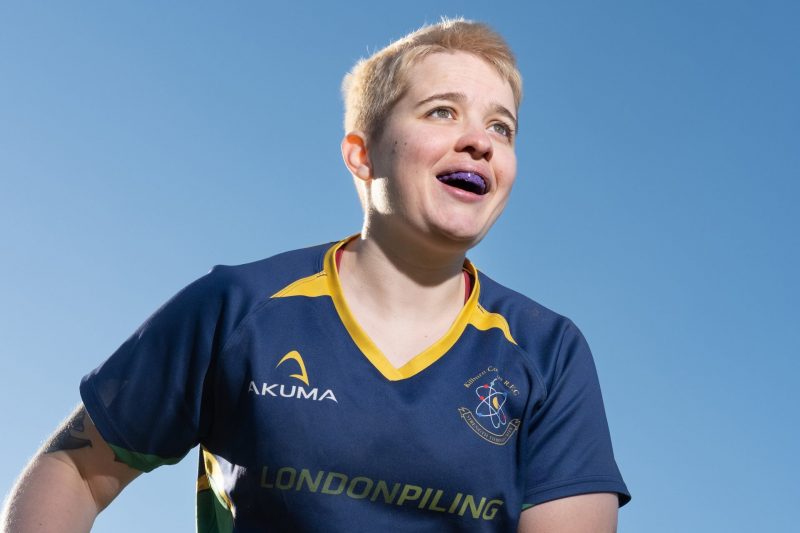 Cerys Bradley’s gregarious successful brother played a lot of sport, and they grew up trailing around after their parents watching him play team sports. Bradley is neither good at sport nor good at fitting in, so they try to find out what makes a Sportsperson and follows their attempt at fitting in with their new rugby team.

The multiple openings to the show are a clever way for Bradley to introduce themself – initially delaying so long a recorded voice starts to mock their inability to start a show properly. The second time we get some admin on their non-binary identity amongst other things, just so we’re all on the same page, and then an actual opening. The audience whoops and claps each time, so they’ve got us onside.

Bradley makes much of their awkwardness but actually they are a warm and welcoming presence. They like to prepare the audience’s lines for them so they get them right, and we get a Snickers bar when we do. Yet their conversational style feels suitable for more interaction. Unusually for a stand up show, you find yourself thinking how great it would be just have a chat with this performer.

The requirement to pick a side – male or female – drives much of Bradley’s humour, and there is great family material on being an aunt or uncle, and being surprised by the urge to have children – its manifestation is pleasingly bonkers. But it’s having to make that choice if you want to participate in sport at any level that poses issues for Bradley to poke and prod at, particularly the need for such distinctions at their self-confessed level of ineptitude.

The thorny issue of trans women in elite sport is mainly avoided but that’s fine, we shouldn’t expect Bradley to be a spokesperson for anything and this is a very personal show. Their stoical determination to enjoy sport on their terms makes for a fun hour with an unlikely and triumphant conclusion.