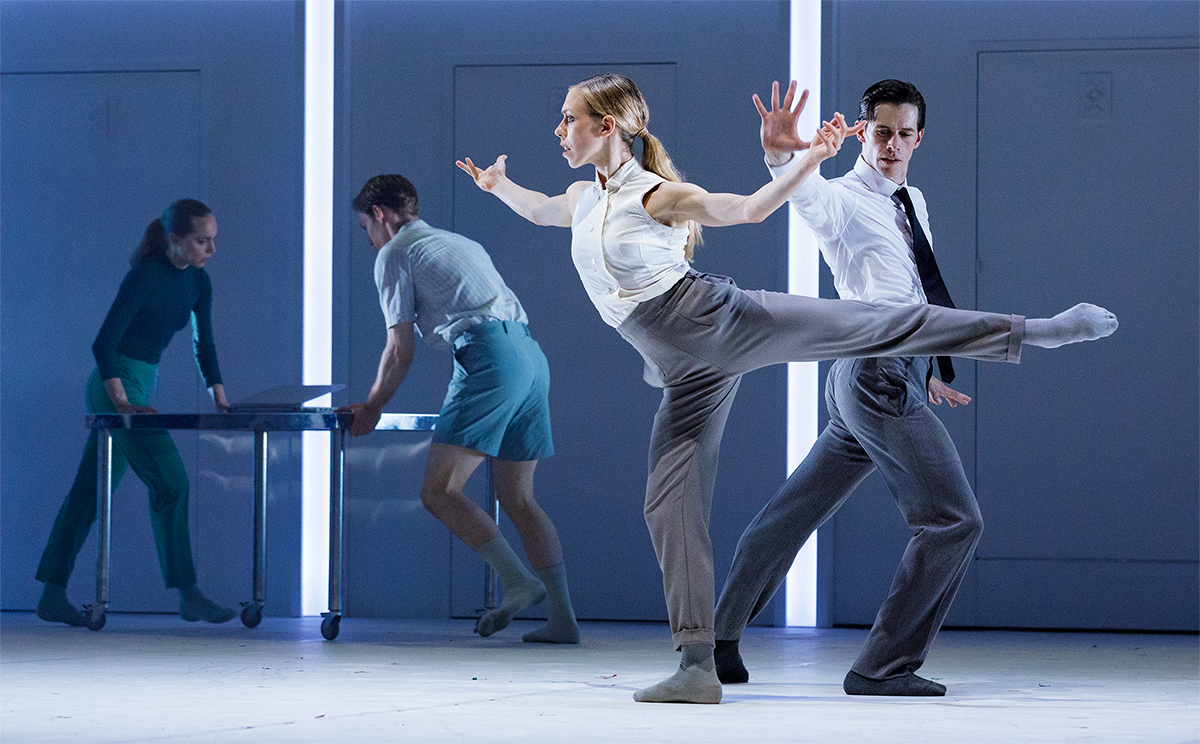 The choreography is cheeky, imaginative

In Délibes’s classic ballet, Swanhilda’s fiancé becomes obsessed with a mechanical dancing doll, the creation of Doctor Coppélius. Scottish Ballet’s brand new version of Coppélia takes the core theme – our fascination with automation – and slaps it down in the present day in a world of sci-fi, superstar tech gurus and Silicon Valley.

Swanhilda is now a journalist. She visits the sleek offices of tech company, NuLife, to interview the founder, Doctor Coppélius, with her fiancé, Franz. When the founder’s initial attempts to impress Swanhilda go awry, she sneaks into the lab by night to form her own conclusions.

Everything about this production is stunning. Directors and choreographers Jessica Wright and Morgann Runacre-Temple use an on-stage camera operator to create a strand of the story on film that runs in parallel to the live action, a score that reinterprets Délibes with an insistent electronic baseline (Mikael Karlsson, Michael P Atkinson) and Scottish Ballet’s sumptuous live orchestra to create a witty, spirited retelling. The mechanical doll becomes a virtual creation that, when shipped, emerges as a 3D creation with something of a mind of its own.

Constance Devernay as Swanhilda is lyrical, precise and magnetic, apparently as much at ease in the camera close-ups as when she’s filling the stage with fouettés. Doctor Coppélius (Bruno Micchiardi) inhabits his guru status with the sincere fervour and compelling charisma of any self-respecting tech visionary. Simon Schilgen‘s Franz appears sweetly oblivious to all of the sinister machinations. And Rimbaud Patron makes an impressively steady job of the camera work.
The choreography is cheeky, imaginative, clearly rooted in balletic traditions but doffing all sorts of caps to contemporary dance. It’s delightfully executed by the whole company who revel in the angular flicks, robotic staccato style and flirtatious gyrations. The production is perfectly packaged thanks to  clinically spare set (Bengt Gomer), futuristic and discretely suggestive costumes (Annemarie Woods) and excellent use of video (Will Duke). Limited use of spoken word (Jeff James) helps to spell out the dilemma at hand: as tech becomes ever more intelligent, have we lost our humanity?
This is a glorious production from Scottish Ballet, bringing their trademark sass, style and tongue in cheek revelry in the artform to life on stage at the Festival Theatre.