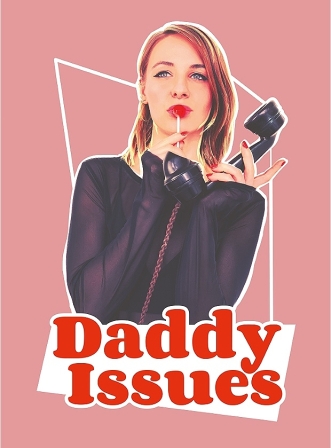 Exploring the intersection between trauma, feminism, immigration, and sex work, Daddy Issues is a deeply promising piece of new theatre from writer and performer Anna Krauze.

The tight corner stage of Pleasance’s Bunker 3 lends itself perfectly to struggling artist Natalia’s claustrophobic studio where, surrounded by her paintings of vulvas, she works for a sex line pretending to be a young submissive for the dominant ‘daddies’ who call. Nat’s insights into the psychology of her callers are discomforting to hear, but they are also deeply necessary, as she frankly questions the obsession infantilising women in a sexual context – both in and out of the sex industry.

There’s a cynical frankness as she challenges notions of toxic masculinity (why is it that ‘daddy issues’ are used as an insult against women when they are the by-product of men?) while also discussing her own imperfect feminism. As she does, she grants insights into her own traumatic past, the litany of affairs with older men, and her struggle against the patriarchy within the art world. She’s a deeply flawed protagonist but this allows her to approach these weighty topics without judgement leading to an honest and unflinching portrayal.

To this end, Krauze does a commendable job in embodying Nat, slowly revealing her insecurities, and owning her titular daddy issues as she grows more comfortable with the audience. She’s also deeply likeable, injecting witty asides and humour at the right moments to alleviate the darkness that would otherwise threaten to consume the performance.

There’s an attempt early on to impersonate one of Nat’s clients which doesn’t really work, but it’s thankfully short lived with the show pivoting to voicemails and loudspeaker conversations thereafter. Similarly, while the subject of Nat’s status as a Polish immigrant is touched upon, it never feels as though it’s explored to the depth that the audience nor Krauze would like. That said, there is a lot else going on, so something had to fall by the wayside.

Daddy Issues certainly isn’t for everyone, but such is the nature of Fringe theatre. For many though, they will find Krauze’s work to be a sex-positive piece of theatre that is remarkable in its honesty. It may need some refinement, but the foundations are there for something great yet to come from both the creator and the show.