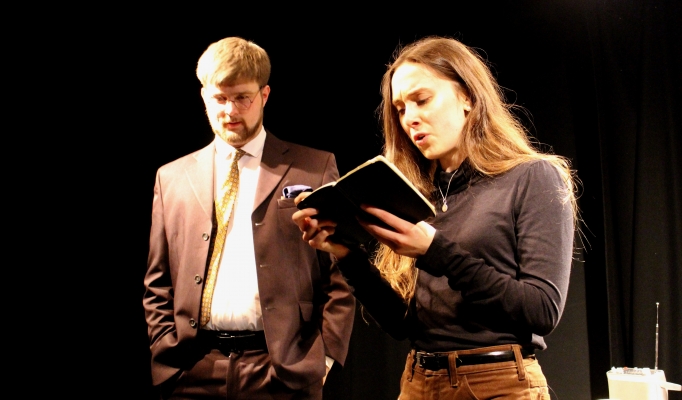 Flawed but full of potential

When the Beat generation are discussed, if Elise Cowen is mentioned at all, it’s usually as an afterthought. Despite her participation in the movement and her skill as a poet, her early death and the lack of physical work she left behind means that her contribution is too often minimised to being merely a confidante of Ginsberg. Dixie Fried Theatre, in association with Bristol Spotlights, have created a play that challenges this, centreing the life and work of their heroine.

Elise is set in the aftermath of her death, with friends and lovers meeting as they participate in interviews. It’s a convenient structure, if a little contrived, and Amelia Paltridge and Guy Woods give touching performances as Elise’s close friends Joyce Johnson and Leo Skir, while Jess Garlick is excellent as slightly distant ex-girlfriend Carol and Harry Petty reliably loathsome as Elise’s callous professor and former fling. His misogynistic outpourings make him easy to hate, but the play’s concern with how its heroine was treated isn’t limited to one man.

Displaying a sharp awareness of the ways in which the heroes of the Beat movement also exploited women, the play raises the issue of whether the apparently “free” lifestyle of its devotees was actually a better option, an idea most sharply doubted by the relatively conventional Carol. Listening to Elise’s experiences, the audience is likely to be sympathetic to Joyce’s need to blame her friend’s suicide on her mistreatment by men, but the play wisely decides against trying to offer any simple explanation for Elise’s actions, focussing instead on the reactions of those she has left behind.

Some parts are overly melodramatic, with one too many revelations tearfully delivered onstage and a lot of storming around, but this is arguably suited to the temperaments of the characters. Other parts of the play, particularly the details of Elise and her ex-girlfriend’s relationship, are moving in their precision and emotional resonance. The set is plain and effective; remnants of poems are scattered on the floor, with just the essentials – period furntiture, books and whisky – to give a sense of an interior. The accents are often distracting rather than convincing, but the costumes are lovely, all black roll-necks and muted browns.

As her companions comfort each other and argue, fragments of Elise’s writing are read aloud by a disembodied voice. The technique works to emphasise her absence, but also sacrifices something of the immediacy of her poems – it would have possibly been nice to have had them simply read aloud by an actor onstage, to have heard a little more of what Elise had to say for herself, a little more bluntly. But, of course, the lack of her literary legacy is a crucial part of her story and of her tragedy; uncomfortable with what the poems showed of their daughter, her parents ensured her writing was burned after her death, with only one notebook surviving.

Elise is flawed but full of potential; an interesting play about a fascinating figure. The play may hopefully spark a new surge of interest in its subject, whose experiences seem particularly relevant to current discussions about gender, relationships and power imbalances. Viewers will leave the performance glad to have been made aware of Elise Cowen, if downcast at the ending of her story.