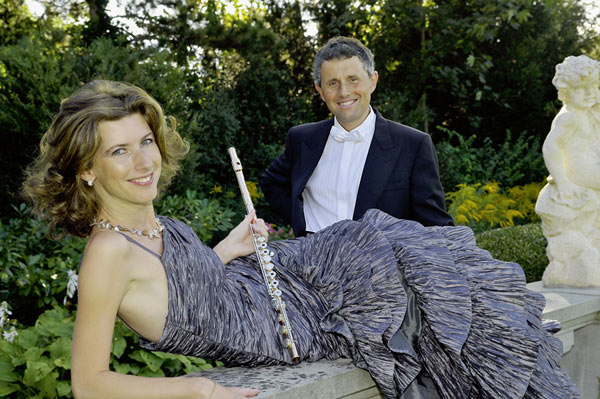 Edinburgh’s classical music scene is in its quiet summer period before the Festival bursts upon us in August; the RSNO and the SCO seasons have ended, so there are only occasional concerts to entertain us. One of these is in the Queen’s Hall tonight: a flute and piano concert of German and French music. Such is the strength of Edinburgh’s classical base that it delivers a very healthy audience tonight, and they are very well rewarded by a high quality concert.

Eva Oertle is an internationally known Swiss flautist who performs widely across Europe, and whose recordings have been well received. Vesselin Stanev is a superb young Bulgarian pianist who trained at the Moscow Conservatoire, and has played at the best concert halls in Europe and recorded widely. However, the key thing for the concert is that these two have been playing together since 2008, and they are in close harmony. The pianist never intrudes too much into the flute and provides the perfect accompaniment, allowing the flautist to develop the melody.

The first half of the concert is composed of the work of Germany’s most famous husband and wife composers, Clara and Robert Schumann, beginning with Clara Schumann’s Three Romances and On the Shore, based on a love song she wrote for her husband to be. This is followed by Robert Schumann’s The Sea Fairy and his Sonata in A minor. All are impeccably played, but lack a little fire in their impact.

However, the second half of the concert, composed of French music, has much more soul. It begins with two works by Philippe Gaubert written around 1910, and then much better known works by Debussy and Fauré, in particular the latter’s Sicilienne, which was used in his incidental music for Maeterlinck’s Pelléas et Mélisande.

Finally, the concert is brought to a close by the most modern work in the concert, Poulenc’s sonata for flute and piano, written in 1956 but very much in the classical tradition and full of melody. They are played with great passion and refinement by Oertle, who ends with a drawn out flourish at the end of the sonata. The audience respond warmly, glad that they have come out on a warm summer evening for a classical gem. It is indeed a magic flute evening!