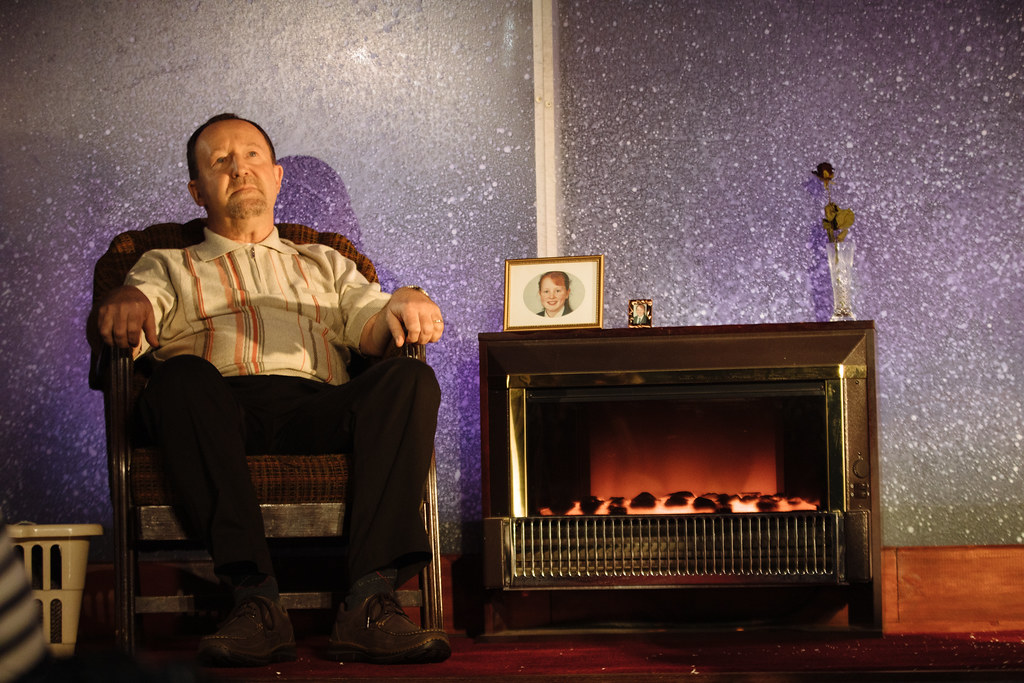 Frances Poet met a woman several years ago who spoke to her about the death of her parents only six months apart. The cause? Asbestos poisoning. Fibres was born from that conversation and is an homage to the struggles of many families – particularly working class, and also in Scotland – who have lost years of life because of corporate malice. The play focuses on one family’s experience of the asbestos crisis in Glasgow’s shipyards. It’s a story about the disregard for labourers from big business, family pain, and the inevitable links between social status, poverty, education and ill health.

Mother and wife Beanie is the central voice for much of the piece and Maureen Carr is perfect in the role. She speaks with familiar Glaswegian cadence and rattles out her monologues with earnest, vulnerability and wit. Well-known comedian Jonathan Watson plays Beanie’s husband, Jack, and as expected, his comic timing is spot on. What may surprise people is his power in the more moving and frank scenes of the play. A lot of the couple’s characteristics and dialogue is pinned to gender stereotypes (Beanie is the anxious and mothering caregiver; Jack is the manual labourer who can’t talk about his emotions) and although this might feel outdated, it is probably a realistic reflection of the era that the couple represent. As the audience’s understanding of the characters grow, along with recognising connections between themselves and those on stage, we quickly begin to feel the intensity of the play’s aims – to explore the powerful and universal themes of regret, death, love, and grief.

One element that may be lacking is the parent-child connection between the central couple and their daughter Lucy (Susan Magowan). The separation of their scenes can be jarring and it’s not until the final act that we feel the interaction between the entire family. It is powerful when it manifests, though, and Lucy’s breakdown in a primary school classroom is arresting – and interestingly one of the play’s funniest scenes. It’s just a shame the audience have to wait so long for this particular thread to be fully developed. Fourth and final character Pete with his parental anecdotes also feel a little tacked on and unnecessary, even though Ali Craig is an engaging performer.

Unsurprisingly, moments towards Fibres’ climax are rightfully grim. And yet, there is a sense of hope that lingers. This fits with what Poet describes as her favourite aspect of Glasgow in the play’s programme: “wit and resilience is one of the things I love most about this adopted city of mine […] it feels right that there should be a love story (perhaps two) at its core.” The play leaves us emotionally challenged, but warmed too. Fibres is magnetic, moving, and utterly memorable.