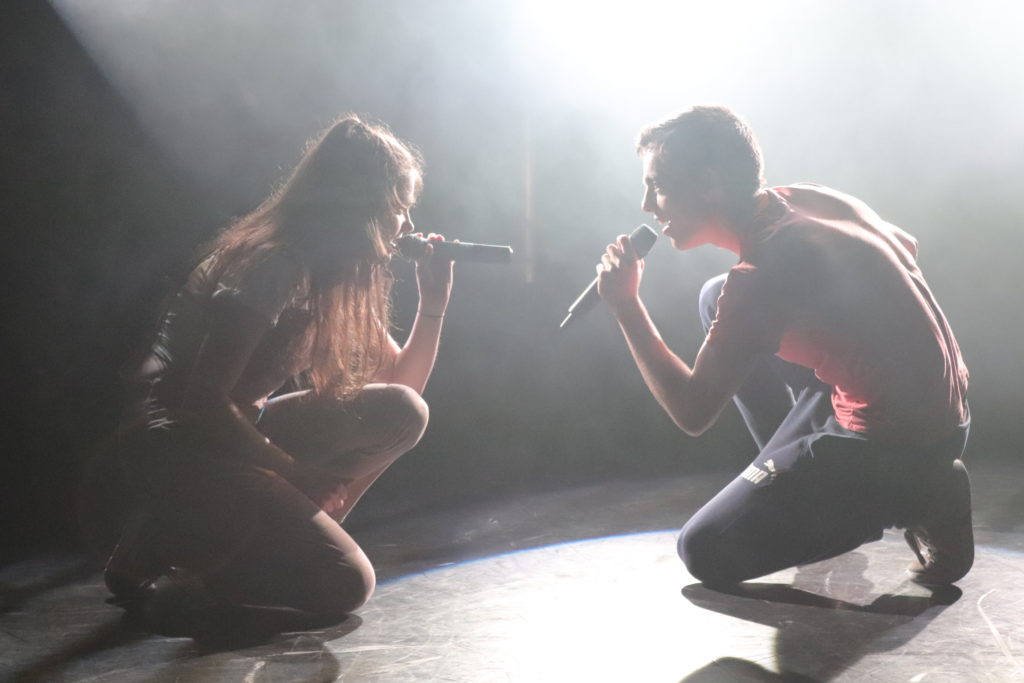 Fires Our Shoes Have Made

Energetic. That’s the word that springs to mind as Pound of Flesh greet their audience enthusiastically, springing across seats to dish out hugs, high fives and nuggets of choice banter. That same dynamism is carried through into their spoken word-cum-hip hop-cum-fairy tale-cum-Bildungsroman, as the four members take us along on the most eventful of evenings in the lives of their two young protagonists, Jay (13 years old) and Saskia (8).

Recently rehomed with their estranged father after the death of their mother, the pair are struggling to adapt to their new living situation. Jay in particular cannot forgive his father for perceived neglect and ill-treatment (just how warranted this ire is remains unclear) and vows to run away from home, talking Saskia into tagging along. Pretending to be far more street-smart than he really is, Jay pilfers his father’s knife and sets out with Saskia into the dark and unforgiving London streets.

Jay nicknames his weapon Excalibur (Scally for short) and it’s clear that while he looks patronisingly upon Saskia’s immaturity, both of them find solace in the magic and mystery of fairy tales. At the same time, Jay is desperate to grow up and chooses the wrong role models to do so, placing his faith in the cool but cruel older boy Crowe. As he and his sister evade goblins and trolls and invoke their mother’s memory through repeating her fantastical story of the Bragadon, it’s clear that they’re up against foes far more fearsome and fleshly than just those of their imagination.

The whole performance pulsates with the vitality of youth and the urgency of growing up, alongside the perils of doing so prematurely. Joe Matty shoulders the lion’s share of lyrical responsibilities, telling Jay’s and Saskia’s story with an expressive forcefulness that is representative of teenage angst. Opposite is him is Lucy Chamberlain, whose facial expressions and carefree physicality are a convincing image of an eight-year-old and the perfect foil for Matty’s intensity. Elsewhere, Luke Mott and Mollie Tucker provide exemplary backup, both in terms of technical accompaniments and supporting acting roles.

It’s this overall cohesion that makes Fires Our Shoes Have Made such a compelling watch. The cast work flawlessly together and are clearly putting their heart and soul into the performance, which is reflected in the emotional response it elicits. The frenetic pace of Matty’s delivery make it difficult to catch every word being said and the abrupt plot resolution feels a little sudden after all the fast-paced groundwork which has led to it. But for a debut performance at the Fringe from an exciting new theatre company, it’s a very encouraging effort which hints at many greater things to come.