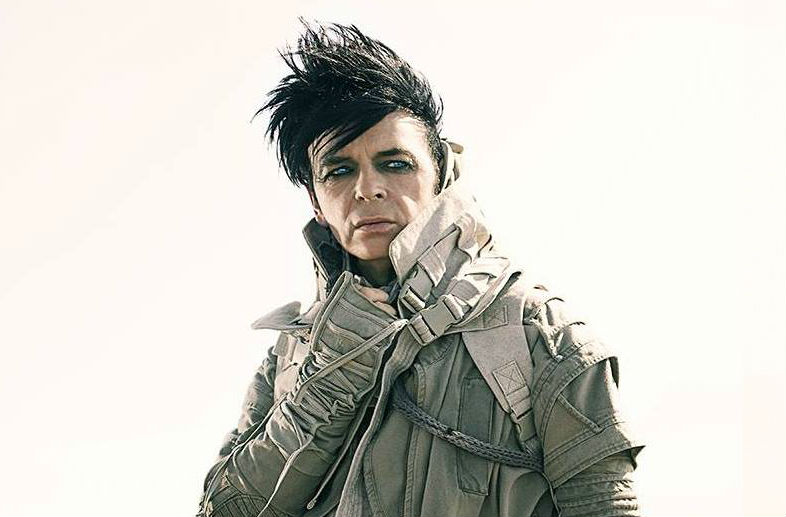 The high-priest of introversion proves who's the daddy

It’s cold outside. There’s a man in a long coat, smoking a cigarette. But the paint’s not peeling off the walls of the supremely elegant Assembly Rooms as an army of black slinks indoors to experience the latest offering from synth-god Gary Numan. The light levels in the bar area are tantamount to abusive for this crowd, but the hall is welcomingly dark.

Support is solidly provided by Nighmare Air, a heavy Californian three-piece, understandably complaining of the cold. Bassist Swaan Miller’s vocals work better over the screeching guitars and rock drums than guitarist Dave Dupuis’s which seem to get lost in the mix with his own playing. It’s like Goldfrapp and the Velvet Underground’s shoe-gazing love-child.

The gig is sold out, yet the hall is not as crushed as expected. Numan slips onstage, hardly visible from the back of the hall, yet immediately rocks into material from the new album, Savage: Songs From a Broken World: a recognisably Numan collection of synth-orchestral, soaring and nuanced industrial pop perfection, highlighted with dreamy, middle-eastern Phrygian scales. His band are fresh, tight and rocking. The current single, My Name is Ruin, features his daughter Persia on the video back-drop; here’s a performer to keep a future eye on. The video and light show thrill the visual senses, synchronised with thumping bass synth and Zeppelin-esque rock drums. The sound is stadium rather than music hall and it feels like it will blow the walls apart to leave us screaming and vulnerable to the Water & Power Corp. False endings create breathless gaps in the air. Numan’s voice, unchanged in almost 40 years, is still the voice of introspection and self-questioning.

His Asperger’s does not prevent him from an almost Eurovision key-change in Cars. It’s like he knows he’s wheeling it out as expected, but he’s having a wee cheesy joke with it. By the time he plays Are ‘Friends’ Electric, the room takes on a devotional, cultish feel, everyone’s singular experience melding into a collective, rhythmic nod. His encore gently soothes the frenetic last song of the set away; a mature and confident father singing tender lullabies to his beloved offspring.

Numan’s look has leapt from Victorian gothic to that of a post-apocalyptic unravelling mummy, and is reminiscent of the punk, re-purposed styling of the late great Judy Blame. He twists and leaps around the stage almost in direct defiance of his recent 60th birthday and self-admitted bad diet. At the end he smiles broadly in thanks to the appreciative audience.

In a touring climate of re-hashed 80s revival (better, or worse than tribute bands? Discuss), Numan continues to prove his worth as the godfather, prophet and indeed the cult leader of electronic music. This is no comeback; Numan has never been away. If he was ever deemed uncool by his fans in the early 90s it’s not apparent here. Any desert years have creatively (and literally) fed into the soundtrack of the inevitable catastrophic event, the great emptiness, supercharged with 100,000 volts of angst; friends are left electric.