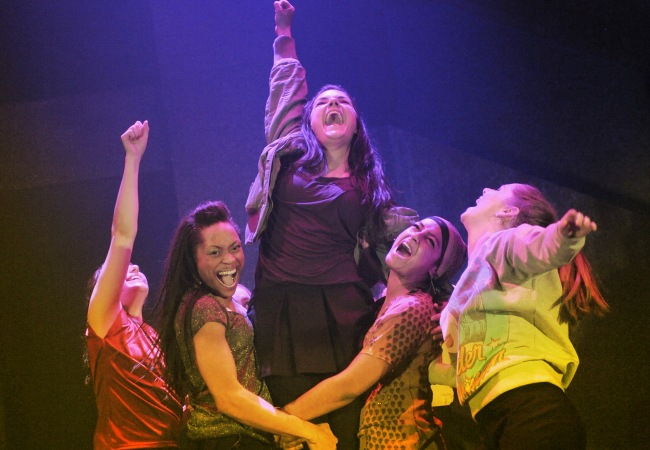 Based on a real life story the talented young cast provide humour, energy and food for thought.

Based on the real-life story of a group of schoolgirls from Drumchapel in Glasgow who banded together to fight the authorities uprooting asylum seekers from their homes for deportation, this musical, written by Edinburgh’s Royal Lyceum Theatre’s Artistic Director, David Greig, and directed and conceived for stage by Cora Bissett, explores the events.

It is a powerful story and one that invites the audience to question what they really know about those families who risk their lives, often fleeing abject horror, to make a home on British soil. And yet, despite the emotive storyline, there is no lack of humour or energy in the songs and dances which are both expertly written and choreographed.

It was 2005 when a dawn raid took Agnesa Murselaj and her family from their home in Glasgow to a detention centre to await deportation back to Kosovo. This is when the Glasgow Girls rallied. Agnesa’s friends from Drumchapel High School were outraged that a schoolgirl who had been studying hard at their school for five years could suddenly be sent back to a country where she had been persecuted and so they set about getting her story out there – petitions, television and radio appearances, rallies.

It is an inspiring story and one which lends itself well to an energetic production where the talented young cast highlight that Glasgow may not be the perfect city, but it is their home. There is humour as Mr Girvan (Callum Cuthbertson) tries to teach this unlikely band English in their early days at the school and a beautiful composition dance piece at the end where the seven girls (Roanna Davidson, Sophia Lewis, Stephanie McGregor, Patricia Panther, Shannon Swan, Kara Swinney and Aryana Ramkhalawon) explore the characters’ different cultures.

The music, at times toe-tapping, often haunting, is eclectic, exploring everything from traditional Scottish to R&B. Laura Wilkie, dressed as a Glasgow schoolgirl, joins the storyline by playing her fiddle beautifully in the background and in one of the most poignant moments of the performance, Terry Neason playing the indomitable Noreen, sings alongside Wilkie’s playing about her experiences as a neighbour of the Glasgow Girls.

The girls are deserving of their standing ovation as the last number comes to an end, and after the Fringe they will take Greig and Bissett’s ingenious play on tour, no doubt having an impact on all who see it.