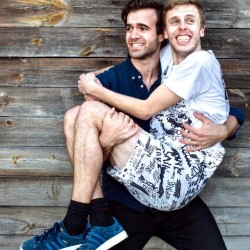 Harry and Chris Save the World

Harry and Chris are a couple of friends from primary school who just happen to be blessed with comedy-rap-jazz superpowers, and they’re determined to use them for good. Tasked with impregnating pandas, winning over prospective iced confectionary employers and saving the world from itself, the duo have bagged themselves a couple of boiler suits, rolled up their sleeves (and ankles) and set to it with wordy zeal.

The wordplay comes thick and fast from the youngest ever winner of the Poetry Slam World Cup (back in 2012) Harry Baker, whose verbal acrobatics encompass the full gamut of tricks, from intellectual double-entendres and clever callbacks to cringeworthy punning and childish associations (there’s a whole section on the Teletubbies, for example). It’s all delivered with good humour and exceptional ability and Chris Read’s proficiency on guitar provides competent hooks upon which Baker can hang his talents for badinage.

The one occasion where we see Baker’s abilities in full flow is a short freestyle section comprised of audience suggestions which dispense altogether with the sublime in favour of being exclusively ridiculous. While he does squeeze all eight or so submissions into a two-minute stanza, they’re crammed in awkwardly and a couple are almost shrugged off altogether – but thankfully the pair’s easy chemistry and charisma draw away focus. It’s still an enjoyable segment, but not where their most accomplished talents lie – that’s in the pre-written songs dealing with pandas, pollution and all manner of other off-the-wall topics.

While impressive enough, the subjects feel a wee bit on the safe side and the one time that the pair do give themselves room to manoeuvre – with a ditty on England’s World Cup hopes – it feels like something of a missed opportunity. In front of an audience famed for delighting in its neighbour’s misfortune (albeit diluted by a hefty influx of Fringe visitors), there was a real chance to move beyond the “nice guys” persona and engage in some cheekier chatter (aimed at either of the Auld Enemies), but the duo prefer to play it safe.

Perhaps it’s a wise course of action for a comedy double act just breaking through into the mainstream, and it’s certainly in keeping with their appearances on shows like the Russell Howard Hour. But a complete lack of any discernible edge whatsoever means that the comedy – although performed with wit and dexterity – ends up as somewhat one-dimensional. Nonetheless, it’s still a hugely entertaining hour of harmless comedy-rap-jazz fun.