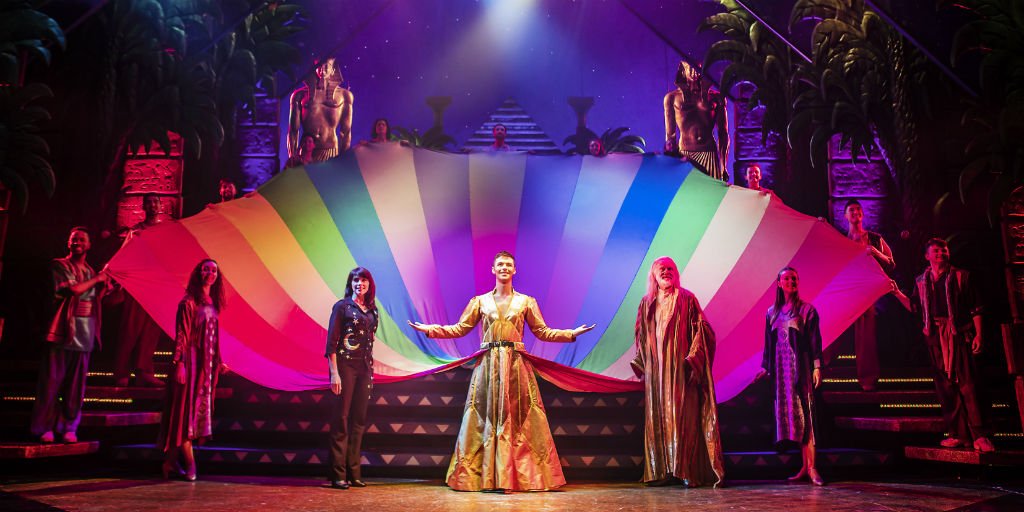 Joseph and the Amazing Technicolor Dreamcoat

If you’re looking for hot-takes on topical issues, incisive insights into the human condition, or, in fact, anything remotely resembling nuance, Tim Rice and Andrew Lloyd Webber’s Joseph and the Amazing Technicolor Dreamcoat may not appeal to you. If, on the other hand, you’re up for some vibrant, feel-good frolics, with the Book of Genesis’ tale of attempted fratricide rendered unashamedly and delightfully camp, and a theatrical experience that is tonally somewhere between a pantomime and a disco, this production is right up your street.

Certainly, tonight’s audience at The Playhouse know precisely what they’re here for. A general air of giddiness takes hold of the auditorium during the overture, which threatens, at various points, to become a full blown singalong. Luckily, the performance is able to fully live up to this electric, formidable level of anticipation. Union J’s Jaymi Hensley gives an unquestionably assured and impressive performance as Joseph. He embodies the clean-cut, boyish charm with which the role is synonymous, and delivers some surprisingly mature and accomplished vocals. Hensley shifts seamlessly between Joe as a cocky, upstart brother, the character’s slightly ‘chippendale’ phase when he serves time as a scantily clad slave in Egypt, and latterly, his role as a powerful, but merciful vizier of Egypt. Hensley’s emotional rendition of “Close Every Door” brings a sense of gravitas to an otherwise garish and cartoonish romp of a show. Similarly, the performances of all of the eleven actors playing his brothers are all as sharp as you could hope for, while the slick choreography, impeccable timing and incredible energy of the group numbers is worthy of the most polished big-name boy band. Equally, Trina Hill‘s extensive experience as a musical theatre performer is evident as she delivers a flawless performance in the potentially uninspiring role of the narrator.

There are no surprises with this incarnation of Joseph. It’s a textbook version of a production many of us of a certain age fell in love with as youngsters, thanks to Jason Donovan‘s West End stint in the lead role in 1991. In many ways, it is no wonder there are no dramatic innovations, given that the show was described in Lee Mead’s day as “commercially speaking, the safest of bets”. Judging by the reaction of tonight’s audience, it’s still a formula that hits the spot for many.

It is fair to say, however, that aspects of the production have not aged especially well since its original debut in 1972. The pastiche of a range of musical styles and reliance on light-hearted use of stereotypes has started to reek a bit of cultural appropriation in 2019, most jaw-clenchingly during “Benjamin Calypso”, in which a largely white cast sing, in faux-Caribbean accents, lyrics about coconuts and palm trees. The representation of Pharaoh as Elvis is similarly staid, and the once Laurence Olivier Award-winning set design has lost its dazzling quality. That said, other aspects of the production, such as the tongue-in-cheek nature of the humour, the family-friendly vibe and the unapologetic campness that compliments the rainbow visual motif, save this production from any particularly harsh criticism. In fact, the use of the kinds of props and costumes that would have been described as naff 10 years ago somehow really work when supported by the sheer exuberance and technical proficiency of the performance, with some almost lurid, dazzling lighting thrown in. The overall result is a show that feels almost like an intentional nostalgia piece; thus, many of the anachronisms add to the overall charm.

One thing we could all do with more of in our lives is sheer, unadulterated and unironic joy. This production undoubtedly delivers. The encore tonight has many audience members on their feet dancing, finally having the opportunity to sing along. Even for the most cynical critic, there’s something genuinely heartwarming about seeing a group of people of all ages and from all walks of life letting their hair down and having a bloody good party – even if it is to a somewhat cliched Elvis impersonator. Sod it: in times such as these, any dream will do.