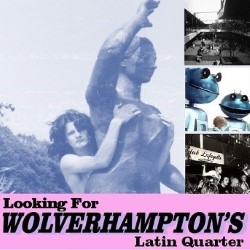 Looking for Wolverhampton’s Latin Quarter is an enjoyable nostalgia-filled wander around mid-1970s West Midlands, as writer and performer Ian Pearce tells of his teenage ambitions to make it big as a poet – or a musician, or maybe even a painter, despite there not being much need for that sort of thing around there.

Set in the year after finishing school at sixteen, with a handful of CSEs and careers advice pointing him towards an engineering apprenticeship, Ian feels that £13.50 a fortnight on the dole (with £5 rent to his mum) gives him the freedom to pursue his dreams. Sometimes that means writing songs eulogising his teenage crushes, sometimes creating Jackson Pollock-esque action paintings with his Dad’s emulsions.

Pearce is a charming raconteur, and weaves tales which affectionately lampoon his younger self and his pretensions to grandeur. He expects passing record company executives to whisk him off to the glamour of Birmingham, and recounts how a trip to Walsall feels like an adventure to a different world. Interspersed among his recollections, his songs are pleasant satires: one captures his council semi with its anaglypta wallpaper, rented telly and serving hatch, another is a pastiche of Lou Reed’s Sweet Jane reworked to impress a girl who is rather out of his league.

It is a safe trek around the follies of youth, aimed squarely at those who can look back at those follies with a fond eye now that they are well behind them. His reminiscences of the idiocy of young men are not so very original, and there are no great penetrating insights. But it is performed with wry amusement and undoubted love for the Wolverhampton of his youth, and provides an enjoyable hour of entertainment… especially for those for whom the 1970s don’t seem that long ago.