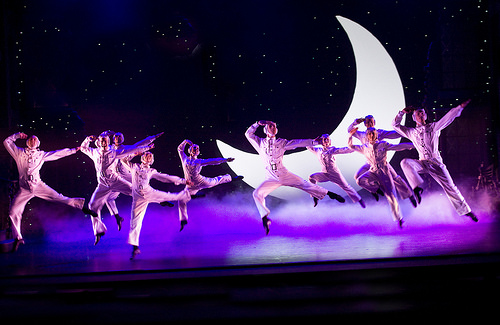 A captivating and innovative retelling of one of the nation's favourite fairytales.

So captivating are the opening scenes of Sir Matthew Bourne’s latest retelling of Cinderella, that the audience could be forgiven for forgetting that they are at the ballet at all. There is an almost cinematic feel to the performance which, in true Matthew Bourne style, is certainly not the traditional fairytale story made famous by Disney. This tale is a far darker retelling, set in London during the blitz of 1940.

There are still many familiar elements: the rags to riches story, the evil stepmother, a fairy godmother (albeit an angel in this particular case), and the most iconic symbol of the narrative people know and love, the glass slipper.

In keeping with the wartime setting, Lez Brotherston, the set and costume designer who has long collaborated with Bourne, has the dancers in greys and blacks to represent the sombre feelings of the time. Although this may seem an unlikely colour scheme for such a dynamic production, against the vibrant backgrounds of his ingenious sets, it works a treat. When Cinderella (Ashley Shaw) arrives at the ball, her stunning silver gown stands out superbly.

And of course the dancing! Stunning pas de deux, perfectly synchronised group numbers, comedic movement sequences, and each dancer expressing every emotion and feeling on their faces, combine to create a transfixing theatrical experience with so many magical moments that it is impossible to pick out just a few highlights.

Liam Mower’s performance, as the ethereal angel, has a lightness of touch and a mesmerising quality that the audience can’t help but be spellbound by. Shaw gives a beautiful performance as the princess protagonist, and as an ensemble, the cast put not a foot wrong—even the hiccups are choreographed!

Bourne deserves all the plaudits he receives (including seven Olivier Awards and a Tony Award for best choreographer) as he continues to break the mould of dance performance with imaginative and innovative retellings of some of the most classic stories.

The New Adventures company are, quite frankly, flawless.