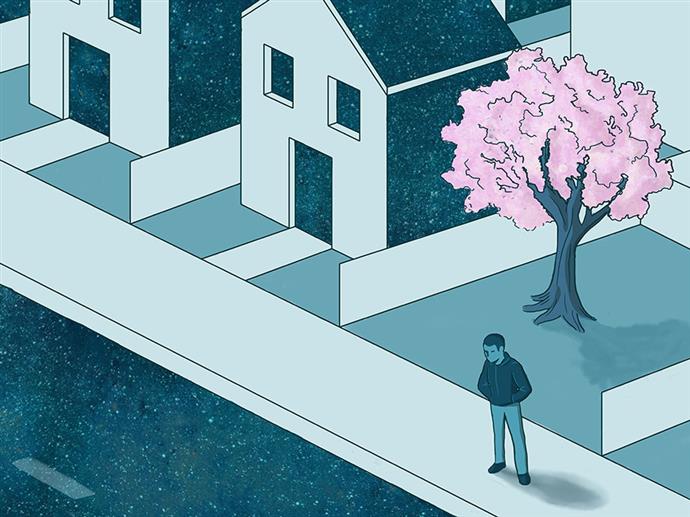 Middletown plays out like a soap opera written by Harold Pinter. Dramatist Will Eno is known for his Absurdist leanings and features of the genre are plentiful in this contemporary offering, performed here by the final year BA Acting students at the Royal Conservatoire of Scotland. The play is set in the eponymous fictional ‘anywhere’ town, and follows the comings and goings of a varied population and their unusual interactions. It is presented as more of a series of vignettes than an interlocking, neat sequence of chronological scenes, and this sense of fluid observation both helps and hinders the play.

The beautiful set design by Julia Quante is immediately striking: a delicate and minimalistic setup with two performance ‘levels’ and carefully placed everyday objects and pieces of furniture. The soothing aesthetic is symbolically deceptive though. On one hand, the human interactions that take place here are humorous, odd, and sometimes mundane. But at other points, particularly in the second half, the characters are disarmingly honest and sometimes brutal. John and Mary emerge from the townsfolk as the central pair, meeting as strangers and ending up closely linked. John’s self-deprecation and constant state of anxiety prove to be both funny and deliberately irritating, while Mary – newly married and desperate for children – mothers John, encouraging him to see life differently. It seems futile though – a theme that permeates the play.

The second half loses its dynamism and becomes much more lyrically dense and morose. At times it even feels like a slog (perhaps deliberately) and while Sam Stopford is fully committed in the role of John, the character’s struggles only become more frustrating than entertaining to watch, as his earlier witty jokes completely dissipate. Parallels between birth and death are drawn throughout the play, which might be interpreted as either hopeful or pessimistic, and the final clever callback to an earlier line of dialogue helps secure this central idea of the circularity of life.

This production of Middletown is skilfully acted and its aesthetics are engaging. The script itself, though, is so challenging that it won’t sustain all audience members. Again, the second half becomes incredibly cerebral and intense but also repetitive, and thus, doesn’t hold us as much as the opening half. This may reflect the central motif of the transition from birth to death. Or maybe it’s just trying too hard to dig deep.