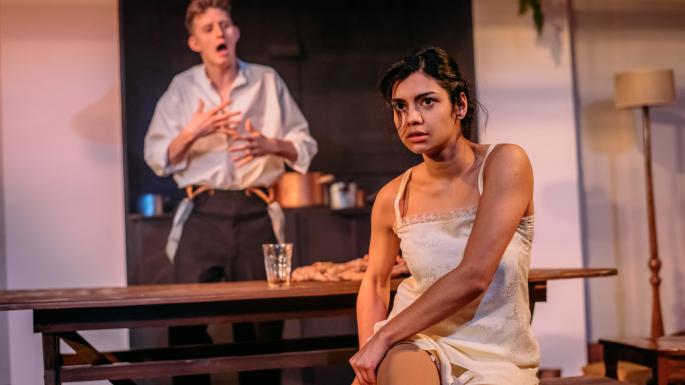 Sex, scandal and strikes stir up Zinnie Harris's adaptation of a classic.

August Strindberg’s classic play of class, sex and power has seen its fair share of productions in recent years. In Zinnie Harris’s adaptation, the story of a scandalous evening between a lady and her servant is relocated from a Swedish estate to 1920s Scotland during the General Strike. With revolution seemingly on their doorstep, the tension is ramped up and the love, lust and hatred unfurls between Lorn Macdonald’s John (named Jean in the original) and Hiftu Quasem’s Julie.

At first it seems like the strike setting does not impact the story – merely there to give a little context to the discussion (the exposition of which is seamlessly woven into the dialogue). Yet, as the drama begins to unfold, the implications and consequences of Julie and John’s actions become even more embroiling and dangerous than in the original. Harris’s new angle, which strips away some of the ambiguity and is written with some distinct Scottish wit, fits so well you could forget that it is an adaptation.

As much as any play requires good acting to be effective, Miss Julie is heavily reliant on the chemistry and tension between the leads to be in any way convincing. Macdonald is outstanding as John; charismatic and seemingly tender, the ruthless twists and turns of the central relationship are all the more shocking. As a character who is usually played as either a manipulative and loveless villain or a passionate but idealist servant, Macdonald somehow convinces you of both as the mood takes him.

Helen Mackay is also marvellous as John’s fiancé; even in minor gestures and line readings you can see her bubbling rage and frustration with everyone around her, as well as her determination to maintain her resolve and avoid drama. When Julie first engages in some barely disguised flirting with John, it is Mackay who draws your attention as she busies herself with chores to ignore her partner’s unfaithfulness.

Quasem’s performance can be jarringly curt at times, and her accent (which lies somewhere between posh Scottish and Southern English) does not always hit the right notes. When the stakes are raised and the insults are hurled however she comes into her own and puts fire in her character’s belly.

One of the performance’s greatest skills is how it can throw a barrage of metaphors at the audience, loving and hateful in their turn, and yet you can believe every single one of them. It is this that makes Miss Julie a performance you will not want to miss.