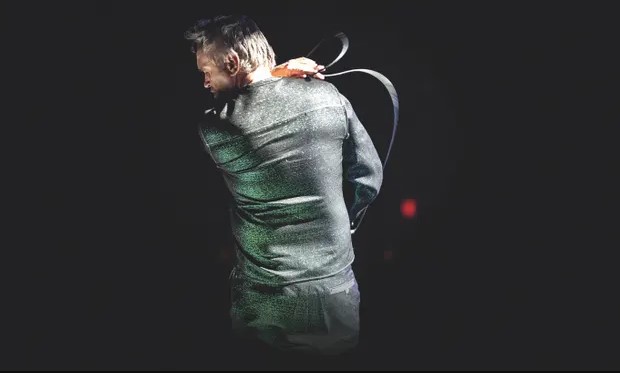 It's viva love as Moz returns to Glasgow

The show starts with clips: Bruce Lee; Eddie Cochran; Pickettywitch; David Hoyle on nationalism – “How important is one’s nationality,” he mangles, “to one’s identity? To me, fuck all”; the Sex Pistols snarl God Save the Queen; Andy Williams croons Danny Boy; WAR sing Why Can’t We Be Friends? as long-term enemies hug it out.

The audience get excited when they see Lypsinka, the American drag queen whose video has signalled the arrival of the band on stage for a few years now. “I’m a star, me, me me,” she jabs, replaced by a quizzical James Baldwin. The music deep and sinister, it rumbles and builds, then on strolls Morrissey. He takes the mic and lightly says, “blah, blah, and possibly blah.” The room erupts as he launches into How Soon Is Now.

He’s on incredible form, skipping about, with fewer of the “no, no, nos” that make him sound as if he’s fending off demons. The crowd adore him; “come back to Dublin,” yells one woman, while some Liverpudlians marvel that it was so hard to get tickets, and a group of teenagers emphatically wonder why “no one knows about this.”

His patter is sparse but he’s adapted it to Glasgow – introducing his catchy new song, Sure Enough the Telephone Rings, he mentions vintage Scottish soap Take The High Road, he takes an amused pop at an unnamed publication that suggested half his audience had walked out the last time he played the city, and returns to it near the end with “I know you’re chained to your seats, and as always, for me, it’s great to be grabbed by the Gorbals, and I want to say, if I fall down the stairs tomorrow, hit my head, split it open, die, can I thank you now, for all the years of support” – which sums up his style: wit, filth, gore and affection.

He introduces his band as Gustavo Manzur from Columbia (keyboards), Jessie Tobias from Mexico (guitar), Brendan Buckley from South Korea (drums), Juan Galeano Toro from Columbia (bass) and Alain Whyte from Finchley Road (guitar). Together they’re a fusillade of sound, a dramatic setting for Morrissey’s supple, soulful voice. Whyte co-wrote some of Morrissey’s greatest songs, including First of the Gang to Die, Irish Blood English Heart and We Hate It When Our Friends Become Successful. His inclusion in the line-up after a long absence has brought back with it The Loop, a delicately shuffling twang with a bittersweet lyric reminding someone they can call, but they might not get through.

The standout is My Hurling Days Are Done, a beautiful song about getting old. I would say that he was too young for that sort of talk, but he’s been writing about death and decline since he was 23.

The most controversial song could have been Bonfire of Teenagers, inspired by the Manchester Arena Bombing of 2017, but it’s softer in the flesh than it sounds online. “This is a song of modern England,” he says, England gets booed, “well, I’m going to sing it anyway.” Which could be his motto. It morphs into a wistful Auld Lang Syne.

His other new songs, I Am Veronica and a Caribbean inflected Rebels Without Applause are good enough to hear people sing them as they leave, while the front rows fight over his shirt, and the merch stand is besieged.