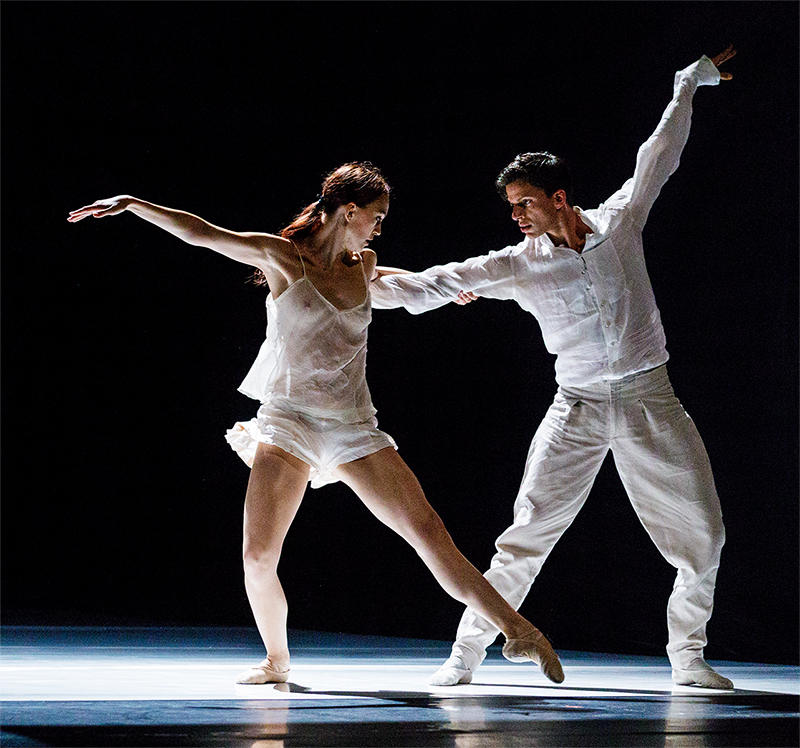 It is always a pleasure to see Nederlands Dans Theater—they have continued to remain absolutely committed to the creation and performance of cutting edge contemporary dance, and the three works they present tonight illustrate a typical lack of compromise. They are performed and produced to the highest standards.

If fact, if anything, the programme veers too heavily towards being something of a manifesto or a showcase, to the detriment of the rhythm of the whole, which is not helped by the substantial time it takes to reset the stage during the two intervals. The three exquisite works are certainly very much enjoyed, but rather as with nouvelle cuisine, we leave remaining inexplicably hungry.

We begin with Sol León and Paul Lightfoot’s Shoot the Moon, where we are the fly on the wall to three love stories, set in three separate rooms. It makes clever use of a revolving stage, which is not only used dramatically and symbolically, but allows for carefully crafted effects, such as the lengthening of a window’s shadow.

The dancers perform León and Lightfoot’s choreography with beautiful precision, with all its classical lines, angularities, and rapid bursts of expression. The projection, in video surveillance black and white, although as a technique already looking surprisingly dated, works very well too, providing a glimpse into what is hidden, reminding us that, as in life, only a partial story can ever be on view.

The only problem with Shoot the Moon is the music, Philip Glass’s bland Tirol Concerto, which tinkles on endlessly and monotonously in the background, and provides the choreography with almost nothing. This is in stark contrast to the second work tonight, The missing door, choreographed by Gabriela Carrizo, whose cracking (despite an overreliance on reverberation) electroacoustic score by Raphaëlle Latini, is unquestionably integral to the work, and therefore its success.

The missing door is a rather surreal and often witty piece, leaning more towards physical theatre than dance. We witness the fragmented and disordered thoughts of a dying man, where fantasy and reality are intermingled. There is a wonderful connection between Latini’s sound (the live sound from the stage is also amplified at points) and the dancers’ movements, which allows them to be tightly articulated. Such remarkable synergy between choreography and music is remarkably rare, and makes this a very special work.

The evening concludes with a longer work by León and Lightfoot, Stop-Motion, performed stunningly by the dancers. Concerned with parting, letting go, and change, it is a beautifully sustained and intense work. Unlike with Shoot the Moon, however, its video element seems distracting and overmuch, and it would be a cleaner and clearer experience without it.

Again, the minimalist music—this time by Max Richter—as good as it is, sucks the life out of the choreography, working against it: it’s simply a poor choice. Nevertheless, the ending is striking and touching, and at this point at least, everything works together perfectly. If this evening’s programme is a manifesto, it certainly has the audience’s backing.