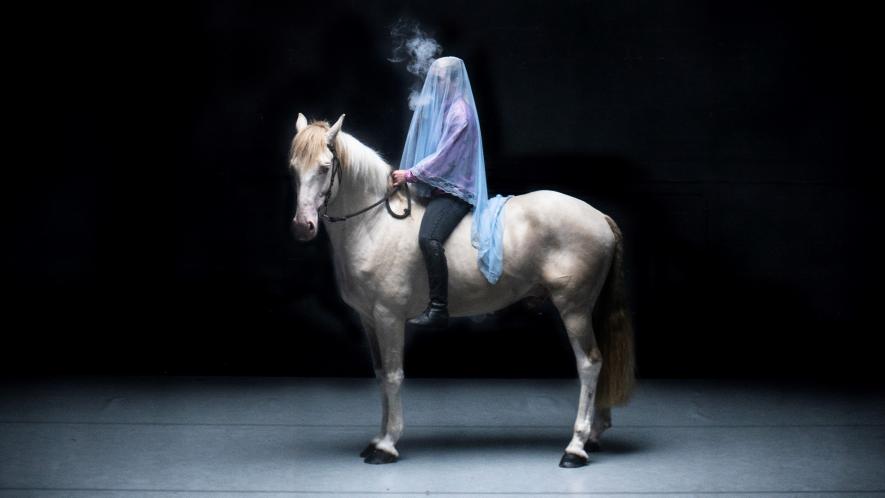 Bangin' boogie with a bone-juddering beat

Half past ten at night and a topless man is prowling, pacing, relentless, on the balcony at Zoo Southside. The lights go out. Time for Night Dances.

A circular light hangs over the stage and brightens steadily revealing the topless guy twisting and gyrating and writhing, lost in a silent soundtrack in his head. Then with a crunching thump, the live music kicks in. Led by bassist, Daniel Fox, of Irish post-punk Gilla Band with euphoric accompaniment from two other musicians, the soundtrack is LOUD. We’re handed ear plugs as we enter the venue. Don’t be fooled by the silent opening to the show: you might appreciate them when the beat’s making your bones bounce.

Our single raver is replaced by a fever dream sequence featuring five barely post-pubescent girls in red short shorts, candy pink T-shirts and white ankle socks. They fling themselves with vigour into a quasi-cheerleader routine without the pom-poms, skipping, twisting, twerking, even flipping somersaults. The vaguely sexualised routine is distinctly unsettling – maybe intentionally so. Following the solo with the replacement raver, three mysterious figures process into the space, shrouded in lace. Then Robyn Byrne, Aoife McAtamney and Jessie Thompson shake off their veils and shimmy into wild synchronised sweaty gyrations.

There’s something compelling in watching these dancers surrender themselves to the beat. If you saw them out in a club (teen girls aside), you’d likely be lost in admiration. There seems to be less of a story here than you’ll find in other dance shows but if you’re hankering for a bangin’ boogie and happy to live this out vicariously, Emma Martin‘s show might just fit the bill.