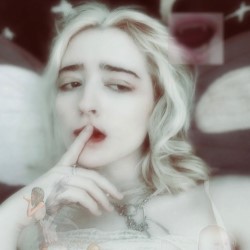 Performed in the apt medieval surroundings of Riddle’s Court on the Royal Mile, with its painted ceiling and chandeliers, this gorgeous gig style meta-musical is wistfully dramatic about life, love and lockdown.

It doesn’t have a conventional script. We’re told by, Nina, that we’re at a Masquerade Ball at some point in the Gothic-Romantic past, somewhere in Europe; and with us there’s a suiter, an arch-nemesis, and a forbidden lover. But also, we’re here, in this room, now. And the songs are going to take us on a journey through a five-act tragedy.

There isn’t a plot as such. Nina, who is also the writer and performer, is a character. Towards the end her guitarist becomes Sir Calum, and they might or might not be a real-life couple, who might or might not have split up. Half the fun is wondering how much they’re making up on the spot, how much they repeat every time, and how much is true (if any).

Nina has a lovely, versatile voice, but her personality is just as interesting. Standing there, radiant in a Tudor style dress with a Venetian style carnival mask, her props in a red plastic box and watered-down camomile in a coffee cup, she can handle anything the lively audience throws at her with wit, grace and style. Sir Calum is sweetly awkward, looking as if he thinks he might be attacked whenever he’s compelled to speak.

There are eleven acoustic songs, with elements of folk, rock, country, grunge, and emo. I could hear echoes of Kate Bush, Courtney Love, Aimee Mann, and Stevie Nicks. The main theme is loneliness and worrying about the future. She tells us she’s finished her English degree and wants to do something with it that isn’t teaching. The subjects range from Red Riding Hood to Charlotte Bronte hopelessly infatuated with a married professor, to blaming herself just to feel in control.

It’s introspective, but it’s also universal, the five-act tragedy structure giving her enough distance to be funny and insightful. Everyone may die in the end, but it has all the optimism of youth.