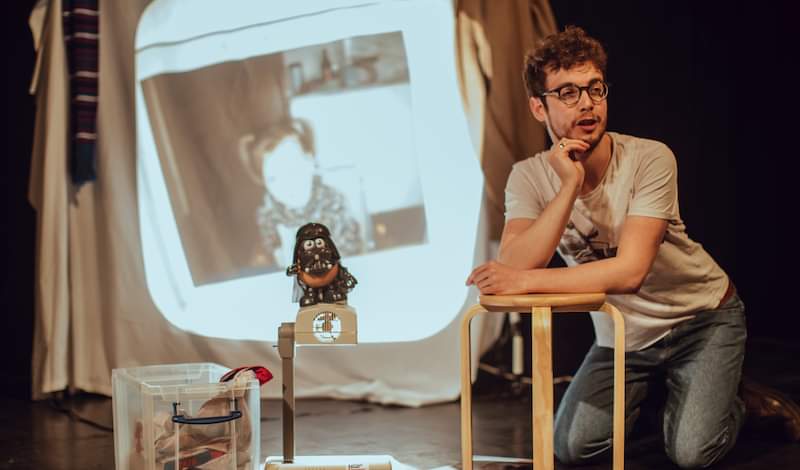 Funny, devastating tale of familial love and not fitting in.

This is, first and foremost, a comedy

Jack Hunter’s a young guy. Lives on his own. Likes the normal things young guys like. Laughs at the normal, daft things that boys laugh at. Misses his girlfriend – they’ve recently split up. And he’s feeling a bit lonely. No wonder maybe as he’s a twin. They grew up with two older brothers. One of six counting his mum and dad. So far, so ordinary. But Jack and his twin sister Bec have cerebral palsy.

Jack’s show, One of Two, is self-confessedly about himself. He isn’t looking for pity, he tells us. This is, first and foremost, a comedy. He wants to tell us about what life is like being one of a set of twins. Cerebral palsy manifests itself in various different ways. Jack has problems with his left side that resulted in an operation when he was a child that made walking with that leg, easier. Bec needs to use a wheelchair and has significantly impaired dexterity but as Jack is at pains to point out, in all other respects, they are ‘normal’.

Hunter is a charismatic performer. He makes frequent eye contact with the audience, extra uncomfortable when he’s playing the role of one of the myriad of people/organisations/institutions that refused to make reasonable adjustments as the twins were growing up to allow them to integrate with their able-bodied peers more effectively. We meet Bec – and other less sympathetic characters – through photos, pre-recorded voiceovers and film. He skillfully weaves the starkly awful facts of Bec’s consistent exclusion and the agonising frustration this causes together with fart jokes before throwing out a few poems and then delving into the darkest comic depths for more humour.

This isn’t a show about disability: it’s a show about family relationships, love, loyalty and heart-stopping kindness amidst the stoniest ground. We think we’re better at talking the talk when it comes to inclusion than we were when Jack and Bec were growing up but we still have miles to go. Though Jack’s story, after a devastating start, has a happy ending.