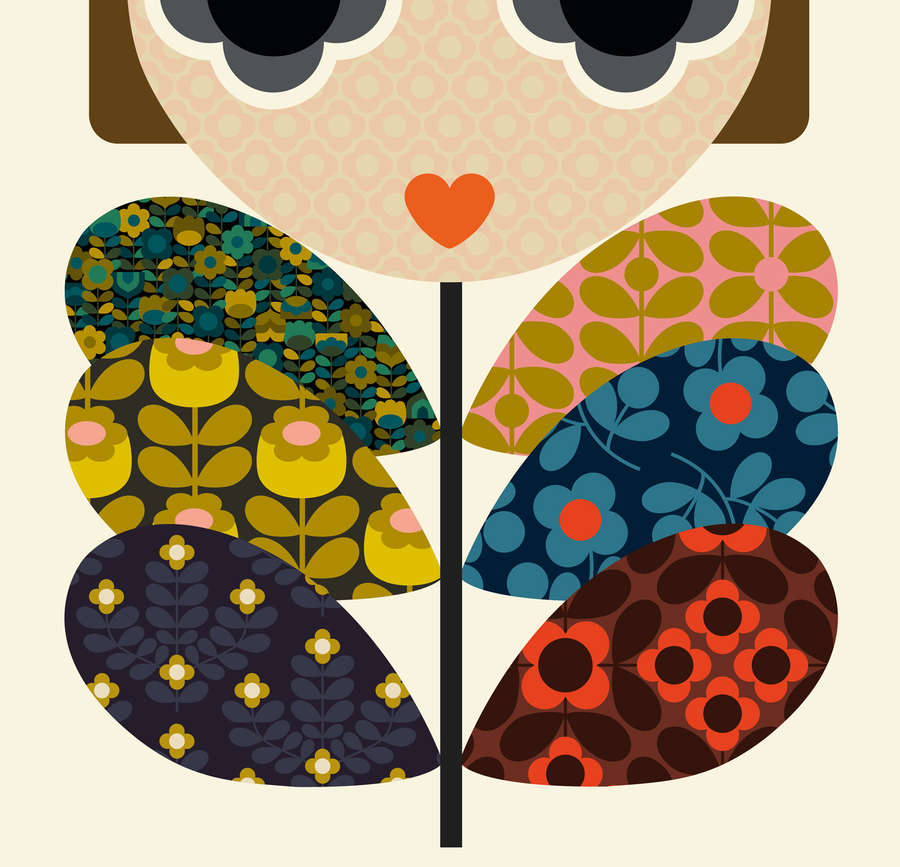 Orla Kiely - A Life in Pattern

Exploring the stories and power of pattern

If you have an eye for a strong pattern, if you recognise an iconic design, you will know an Orla Kiely piece when you see it. Crammed with colour and deceptively simple, Kiely’s patterns adorn hats and handbags, scarves and record sleeves, a Citroën and a sleek pair of shoes. They feature on John Lewis shelves, in Japanese boutiques and the front cover of the Design Museum’s Fifty Bags that Changed the World – you can’t get much more lauded than that in the fashion world!

The new exhibition at the Dovecot is by no means a straightforward collection of items from an artist’s dusty back room. Care, attention and creativity has gone into the concept of the exhibition, developing organically through various stages, as has Kiely’s internationally famous business. It is a brightly curated show with plenty of space to stand back and admire the larger-than-life-size dresses hanging as if in a massive wardrobe, replicated in a set of miniature stick dolls with names like Agatha and Ivy.

Colour and print are at the centre of both Kiely’s life and success. After being encouraged at her convent school by the art teacher, Kiely won a place at the National College of Art and Design in her native Dublin. After a sojourn in New York where she honed her craft painstakingly mixing precisely the right paint shade, she wanted to learn about knitted textiles and attended the Royal Society for the encouragement of Arts, Manufactures and  Commerce (RSA) in London ”where you can go in with one idea and come out something completely different; where you can find yourself.” In 2011 she became an Honorary OBE and in 2017 was made Senior Fellow of the RSA.

The exhibition is organised by the Fashion & Textile Museum and starts with the Print Library. Panels of natural, especially floral images in a broad palette range from turquoise to olive, and sunshine to the classic orange of the ’60s childhood home. Scarlet discs amidst petals of muted blues bring to mind Dick Bruna‘s Miffy illustrations which were popular with young readers of the late 1960s. A collection of retro design which ‘yearns for certainty in tumultuous times’, as the information panel put it; but look closely and the viewer will also discover an intelligence of design which bears living with on a day-to-day basis. Upended owls fit together nicely, playful juxtapositions of original shapes create something new: a peacock tail of flower stalks, parachutes made from petals, apples with flower cores, and somehow they lend themselves equally to dress fabric as to place mat.

Around the corner is the Wall of Bags and opposite this a set of V&A clothes stands inspired by the mid to late decades of the 20th century. Glorious auburn zigzags, organza baby blue collar, and a raincoat made of the ubiquitous PVC (or tablecloth material). There is also a dated looking bathing costume to die for!

Like many artists, Orla Kiely represents herself within and through her work rather than through words in the exhibition. Let the vibrancy and clarity of colour speak for her, and allow the focus and precision with which she has built her signature and brand do the talking.