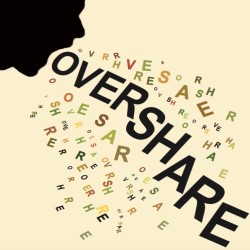 Unbelievable storyline fails to deal with issues of mental health as advertised.

The concept of Overshare! is why some people share everything that happens to them while some share nothing at all. The show aims to explore the effects of what not sharing things has on people’s mental health. A sound idea for a play. Unfortunately, sound concept is where this ends.

The storyline is not believable. A 23-year-old young lady called Jess is approached on the street asking if she speaks Punjabi, because it is blatantly obvious to everyone except the characters in the play, that she has a different skin tone from her very white parents. The shock revelation that the white man she has somehow believed all her life to be her dad is in fact not her biological father is then the backdrop for the lack of information sharing.

Despite this blatant plot hole there is a recurring interesting section from the outset of a jury judging the family for their crimes of not sharing enough and the audience is lead to believe this will be cyclical and concluded at the end. This is not how the play ends.

Aside from the parents and their daughter there is one more character, Jess’s friend Daisy, who is the opposite of the family and shares too much including some ill-timed and unnecessary scenes where she itches her crotch and then admits to eating a string tied round a joint of beef. Daisy is also supposed to be 23 and has suffered significant trauma in her young life losing both her parents, however, there is no mention of the mental health issues which may have arisen from this.

Having finally been told the truth about her father Jess seeks support from the GP and is subsequently referred to a therapist who she gets an appointment with two minutes later – another unbelievable event.

Mental health is vitally important and many will look at this play from its description as one of those at the Fringe dealing with this important issue but they will be sorely disappointed.