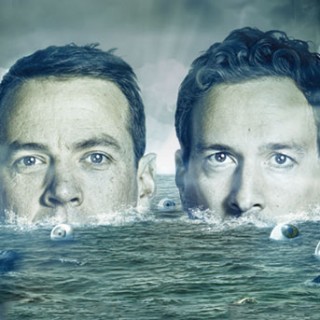 A high-energy and hilarious adaptation of a classic combining all kinds of comedy.

The eponymous Pajama Men begin their set with a flurry of throwaway one-liners about how good the upcoming show is going to be. It’s a frivolous but very funny sequence which sets the tone perfectly for what promises to be an hour of energetic, absurd and, above all, hilarious comedy.

The well-established duo apply their particular brand of humour to the classic tale of The Three Musketeers, combining elements of stand-up, sketch, musical comedy and improv into a well-rounded show which leaves no box unticked. The two men play all of the characters, swapping roles in the middle of a scene numerous times for comedic effect and imbuing each of their personas with various tics, idiosyncrasies and foibles which all work incredibly well.

So what if D’artagnan appears to be French when played by one performer and Spanish when played by the other? It’s exactly these sorts of inconsistencies which the pair normally highlight to enhance the humour, and though this particular discrepancy is let slide, not much else is. Their facial expressions, accents and mannerisms are top-notch pieces of physical comedy, rivalling any master of the trade in the world.

The duo offer something that no other act seems to do at the Fringe; a unique performance which blends all different kinds of comedy into one, incredible experience. You won’t want to take your eyes or ears off them for a moment, for fear of missing a deft gesture, roll of the eyes or muttered quip guaranteed to have everyone around you in stitches.

It’s a silly, captivating hour of good, clean fun – and not in the mundane way in which that phrase is often used. There’s no malice or spite associated with the cynical stand-up, no tedious sing-alongs which plague certain musical comedies, no grasping at the straws of some improv gigs. It’s fast-paced, laugh-a-minute stuff, all for the daftest but rightest of reasons.