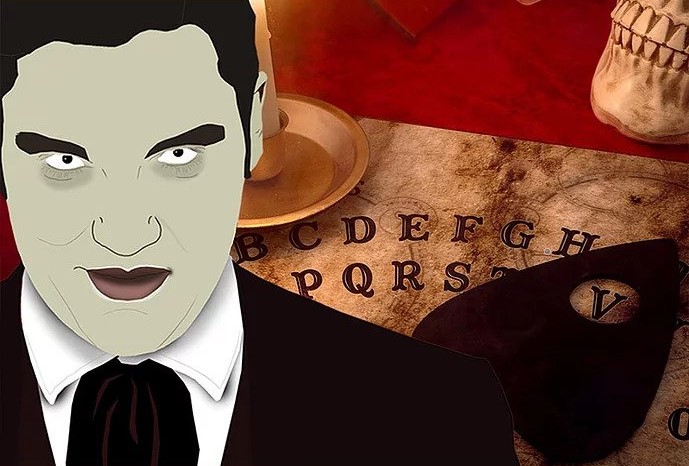 An entertaining hour of witchcraft, spooky seances, and the paranormal

From witchcraft to Ouija boards, mind-reading to card tricks, Ash Pryce conjures the spookiest of tricks to keep the audience entertained. This show is a must watch act at the Edinburgh Horror Festival. It is easy to see why Pryce is a sell out act at multiple past Edinburgh Fringe festivals, moreover it is billed as ‘pay what you can’, so there is little excuse to miss it.

An interesting note about the theme of the show is how well Pryce is able to weave a tale about Spiritualism. He starts off with the history of witchcraft in Salem and then moves onto personal stories. He also tells the stories of murders in Europe before finishing off with some more anecdotes. The resulting effect is pleasant, but with the correct dose of creepy. The storytelling itself manages to bring the different parts of the act together, even though they aren’t really connected in any sense.

Despite a late start, Pryce fills the hour with a number of tricks; in particular, his set involving lit tealights and a Ouija board are especially enticing. Pryce himself is engaging and funny, accompanied by a generous dose of audience participation is necessary and all the sets involve members of the audience being called on to act as the magician’s apprentice. The looks on peoples’ faces as he effortlessly reads their minds definitely adds to the surreal atmosphere. But don’t worry about being called on, all the sets are relatively straightforward. The seated audience is fully on board in this packed crowd too. Appropriate ‘ooohs’ and ‘wows’ punctuate Pryce’s flourish with magic and the revelations of his connections with the ‘other’ world.

If you are a sceptic, then Pryce has enough to just start making you doubt yourself. But if you are a believer of the occult to begin with, prepare to be convinced about the thin veil that separates our world from the next. It is a thoroughly entertaining performance!