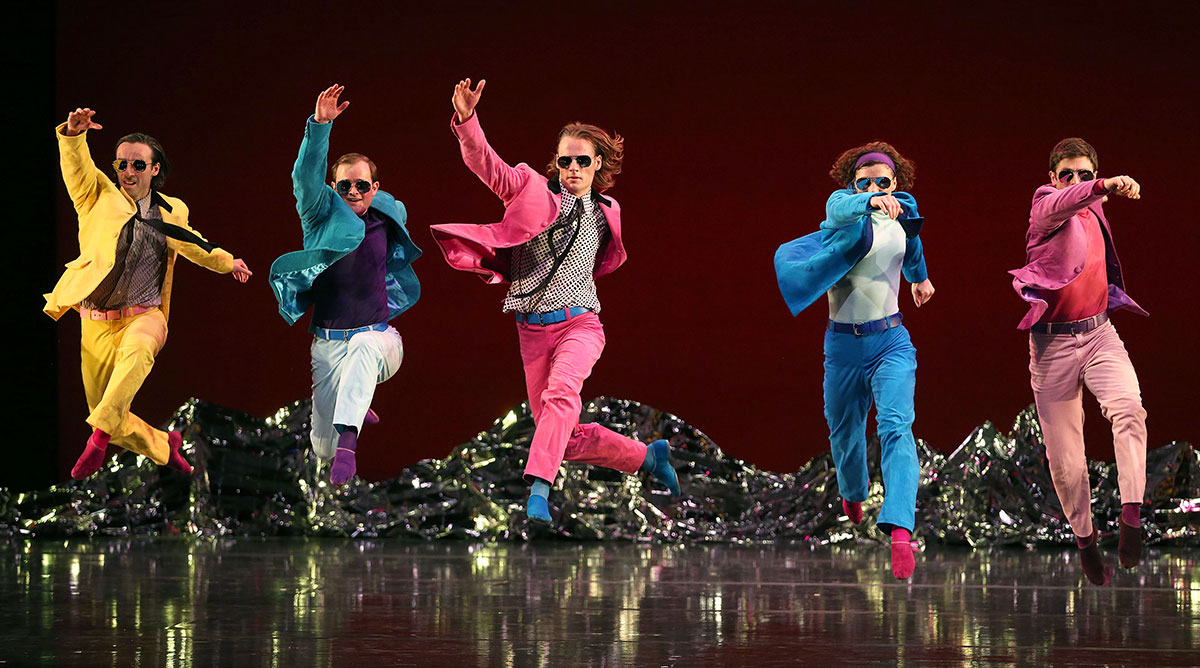 Epigrammatic Beatles homage is more about the music.

Epigrammatic Beatles homage is more about the music.

Morris collaborated with Ethan Iverson on this imaginative re-interpretation of the original concept album, which  built on the explorations of Revolver and cited influences including the Beach Boys, Frank Zappa and Ravi Shankar.

The results are an intense, often dizzying and occasionally zen hour of dance which feels like the product of the (peace and) love-child of Jerome Robbins and Bob Fosse; Morris’s energy for delivering so much yet allowing it to appear simplistic is as vibrant as the candy colours worn by his company. Moving from flowing to puppet-y syncopation, the dancers become a human kaleidoscope, hands sometimes moving so fast as to become a blur against Johan Henckens’s colour-changing backdrop. The male dancers are lifted as much as the females—sometimes by the females—men dance with men and women with women, alongside the usual hetero couplings; this is refreshing compared to more traditional forms of dance yet feels normal (as it should).

The production embraces an era of the iconic style of Prisoner Number 6, Twiggy, Lt Uhura, Herb Alpert and the Man From Uncle, through the utterly fab costumes by Eric Winterling.

Oddly, the staging feels like the visual accompaniment to the inventive score. Iverson has woven themes and variations from the original album (plus Penny Lane as a gesture to Liverpool) with nods to iconic musical characters including Morris’s other close collaborator, Lou Harrison, 60s French pop, and, perhaps Jacques Loussier, whilst also tipping a cap to sleazy blues, classical Indian, honky-tonk and baroque. Most surprising and welcome is Rob Schwimmer’s Theremin-playing, a bonkers yet genius placement within the eight-piece band. This under-used instrument buzzes with such energy as to sound (diversely) like a humming backing vocalist or 1900s recording of a viola as heard through an old megaphone. Is it pop-tastic classic, or classicalised pop? Who cares? We are definitely along for the trip.

To add value to that particular performance, the post show Q & A gives insights into Morris’s work ethics and inspiration, including his work with people living with Parkinson’s disease. During this, he comes across as a both highbrow and irreverent creative. When asked if he would tackle another album, whose would he chose, he replies: Burt Bacharach (yes please!). His parting gift of wisdom is for us all to jump while we can. Sound words.

Even if Pepperland leaves you asking (in true 60s style) “…what does it all mean?” there’s no denying we all need a little more love and peace in our lives, and Pepperland delivers in psychedelic bucket loads.