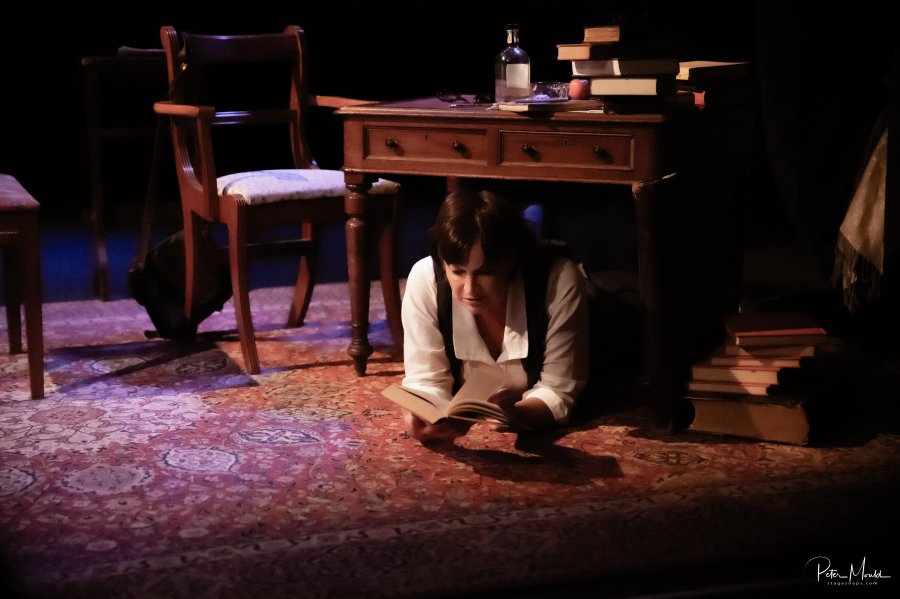 A wonderful theatrical representation of a timeless essay

Room – A Room of One’s Own is a dramatisation of Virginia Woolf’s classic feminist text. It’s been a staple of English Literature and Gender Studies courses for the 90-plus years it has been in print, and this is a welcome opportunity to see those words brought to life.

Originally conceived as two lectures to female students at Newnham and Girton Colleges in Cambridge, the written essay takes the form of Woolf searching to make sense of her topic, ‘Women and Fiction’. Just as Woolf uses a novelist’s tricks to bring the subject to life, Heather Alexander uses all the skills of the theatre to bring the essay to the stage. Alexander begins at Woolf’s desk trying to capture what the topic means, then – as she comes to terms with her task – she takes to the podium, before slipping off into the many characters that people the essay: the angry Beadle, the many Marys, Woolf herself.

Some of the essay’s more polemic set pieces are performed as recordings, allowing Alexander to react to them and burst into new topics – much as Woolf does on the page.  Alexander does not attempt an impersonation of Woolf, to the relief of anyone who’s heard recordings of the original, but much more importantly she captures the playful tone and intellectual curiosity of the essay.

All the famous passages from the essay are here: the realisation that poverty is a serious bar to women writing (still widely relevant today), the story of Shakespeare’s sister, and the realisation that in fiction women must exist in relation to the world and each other, and not just as foils for men. That’s the Bechdel Test, many years early.

If there is a flaw, it is that some of the background sound and music is too loud at times and it can be hard to make Alexander out as she talks over it. But overall, this is a wonderful theatrical representation of a timeless essay.