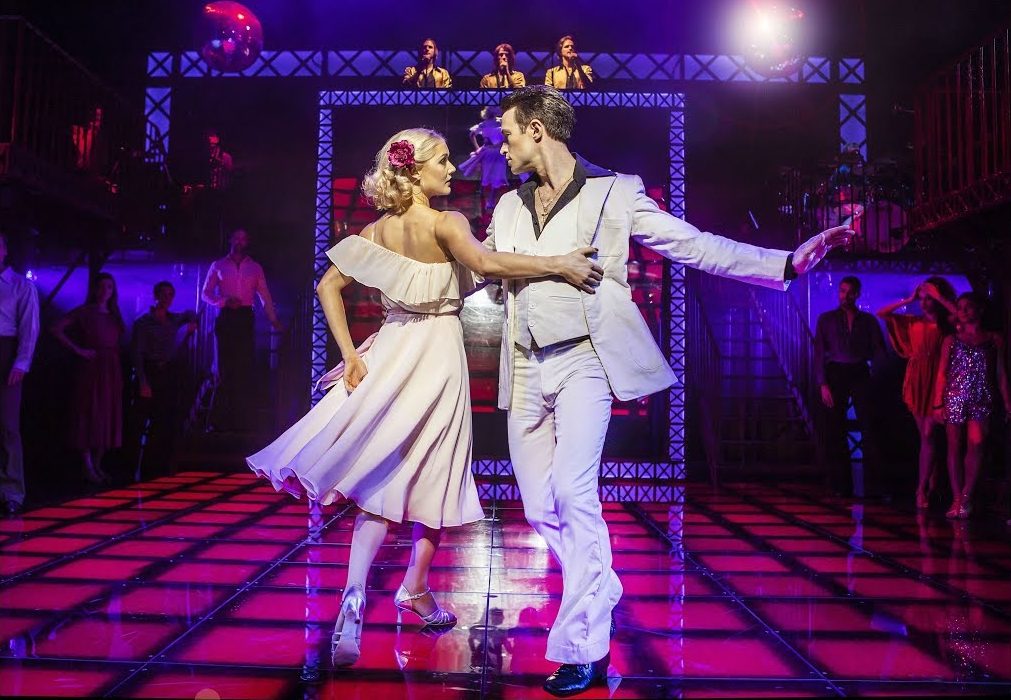 Are you looking to warm yourself up on a cold November night? Then head on down to Edinburgh Playhouse to feel the heat of the Disco Inferno, and catch a fever you won’t want to cure – Saturday Night Fever!

This show represents another edition to the movie-to-musical phenomenon, and one done spectacularly well. Director Bill Kenwright ensures they pay homage to the iconic 1977 John Travolta classic while also offering more of what fans love: dancing, singing, and drama!

Besides the flares and the choreography, the main standout of the show is the soundtrack. Saturday Night Fever begins with a bang as a red-hot live band blare from beyond the curtain – impossible to ignore, pulling you into their world from the first note. The Bee Gees, played fantastically by Drew Ferry, Oliver Thomson and AJ Jenks tower above, like a chorus of omnipresent angels who watch on as the story unfolds.

Saturday Night Fever tells the story of Tony Manero, who we would characterise as an anti-hero by today’s standards. Vain and selfish yet still charming enough to be likeable, it is only through competing in a dance challenge and meeting the high-achiever Stephanie that Tony is forced to reconcile with his beliefs against the backdrop of working-class Brooklyn.

Despite being set in the 1970s, to new audience goers, it is a surprise to realise just how little has changed in those years. Saturday Night Fever is a snapshot in time where a lot of the issues facing young people then are still prevalent now, such as classism, racism, sexism, and physical abuse. Given how lively the soundtrack is, it serves as a reminder of what everyone, including Tony, is trying to break free from. To him, the dancefloor is the great equaliser showing the one place where all your worries melt away and he can be king.

This adaption translates the hypnotically rhythmic dancing from the big screen to the stage thanks to Olivier award-winning choreographer Bill Deamer, while designer Gary McCann creates a set that matches the well-paced scenes, including a gigantic mirror behind the light-up dancefloor to ensure we don’t miss any of the action. Jack Wilcox nails the self-loving yet majestic grace of Tony Manero and Faizal Jaye brings superb energy to his small part as DJ Monty while singing Burn Baby Burn. More praise cannot be given to the band and the Bee Gees – they give 110% and the audience love it.

This is a light-hearted musical that deals with very real and controversial themes, yet it also gives characters a little more agency compared to the film. The movie soundtrack remains one of the bestselling of all time and for good reason. By the end of the show, the audience are grooving on up the aisles and considering finding their own 2001 Odyssey-style club to keep the night going.