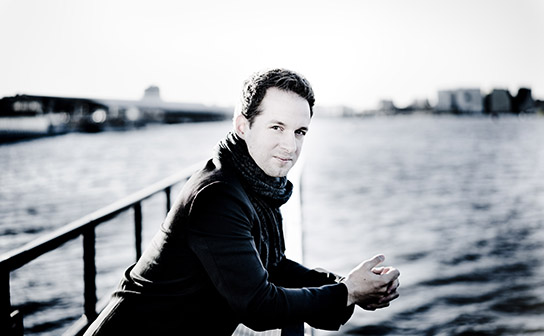 There is a very full Queen’s Hall for the SCO concert tonight. This is partly because this is a popular programme, with a Beethoven Symphony and a Ravel piano concerto, but it is also, perhaps, because the programme features both a very eminent conductor, Josep Pons, and a very fine pianist, Bertrand Chamayou.

The concert begins with a more unusual work, Variaciones Concertantes written in 1953 by Argentinian composer, Alberto Ginastera. He was a student of the great American composer, Aaron Copland, and was very influenced both by contemporary classical music and traditional Latin American music. It was written for the musicians of the Asociación de la Música Orchestra, Buenos Aires, and designed to give individual musicians a chance to show their skills.

It begins very quietly with a theme for harp and a cello, followed by a movement for the string section. Then it moves through a set of variations, which give the skilled individual soloists of the SCO a chance to show their expertise, before finishing with a final flourish for the whole orchestra. All this is brilliantly conducted by Pons, who is Spain’s most eminent conductor and is clearly very familiar with Ginestera’s work. It makes for an exciting and colourful introductory work for the concert.

The concert continues with Ravel’s Piano Concerto in G, written in 1932, and first performed that same year in Paris. This was the age of art deco, and Ravel’s concerto is often referred to as an ‘art-deco’ composition. It begins very unusually with the crack of a whip, and goes into lots of bright colourful themes, often influenced by jazz and blues. It is brilliantly played by Chamayou, who is one of France’s finest young pianists, and a featured artist with the SCO this season.

The concert concludes, after the interval, with Beethoven’s Fourth Symphony. This is one his lesser known symphonies and was commissioned for a smaller chamber orchestra: hence it fits the SCO’s thirty-plus musicians perfectly. It is true it isn’t as dramatic as the Fifth or the Ninth Symphony, and often resembles the symphonies of Haydn or Mozart rather than the grand Beethoven symphonies, but it is still a very fine work, particularly the slow movement, which is very romantic. It is beautifully played by the SCO, with Pons very much in command at the rostrum. The concert is well received by the big Queen’s Hall audience.