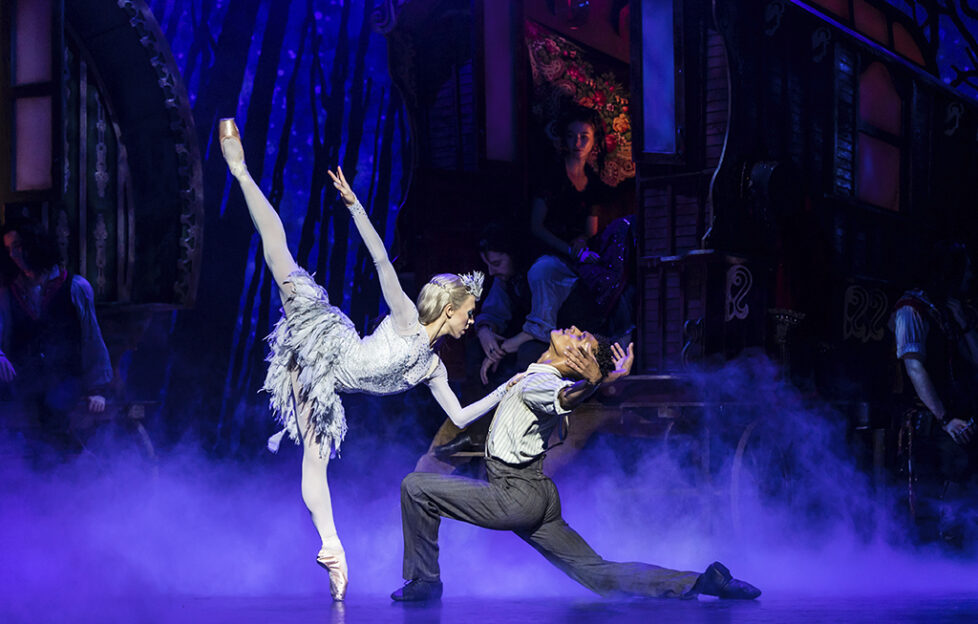 After a sell-out tour in 2019, Scottish Ballet’s production of The Snow Queen returns to the stage to dazzle audiences once more.

Though this glittering production is inspired by Hans Christian Andersen’s classic tale, in this story Christopher Hampson – the company’s CEO and Artistic Director – gives the Snow Queen a sister, the Summer Princess. Through this relationship, dancers Constance Devernay-Laurence and Alice Kawalek are given the opportunity to explore the duality of their characters. The Snow Queen is given further dimension, presented as a more sympathetic multi-faceted character rather than a just another villain, while Kawalek is able to play both a delicate princess and a cheeky headstrong pickpocket.

The story of these two magical sisters becoming entangled in the lives of two young lovers, Kai and Gerda – performed by Jerome Barnes and Roseanna Leney respectively – is set to the music of Rimsky-Korsakov, which is performed fantastically by the full Scottish Ballet Orchestra.

Scottish Ballet prove that there is more to ballet shows than just dancing, for they succeed in nailing the most important rule in storytelling: show, don’t tell. It’s a wonder seeing these dancers act and dance while making it look as natural as breathing. In fact, it’s so seamless that you have to take a step back and think about how intricate the whole act is. Being able to tell a story silently through the language of dance, music, costumes, set design, and facial expressions is pure magic.

Out of the many gorgeous dance sequences, the most beautiful is the pas de deux between Devernay-Laurence and Barnes. This production has a vast array of characters that enables the cast to incorporate different dance styles, as well as gymnastics, into their routine while bouncing between comedic and dramatic performances. A great surprise is the use of projections and moving set pieces designed by Lez Brotherston. These extra steps make you appreciate all the thought that went into making the show as imaginative as possible. One small worry is the restricted view of the mini-stage for some audience members during the circus scenes, but there is so much to see that it is only noticeable for a short time.

Subtle yet important alterations have been made to the 2019 performance, working with Davie Donaldson who is a consultant for Gypsy, Roma, and Traveller communities. The popular traveller dance scene has been updated to give the characters more agency – particularly Mazelda the fortune teller, who is danced wonderfully by Grace Horler and now a noticeably dominant figure. This isn’t the first time Scottish Ballet has shown increased cultural sensitivity when re-visiting a work, as Peter Darrell’s production of The Nutcracker also underwent some significant edits.

There are many reasons why Scottish Ballet shows continue to be so popular but it is very encouraging to know this hasn’t made them complacent. If anything, it has urged them on to bigger and better feats – resulting in this flawless performance.