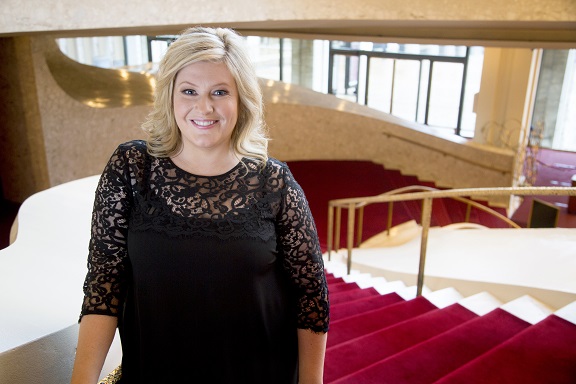 The Scottish Ensemble are one of Britain’s leading string ensembles and tonight they are paired with Karen Cargill, one of Scotland’s finest opera singers in a programme which ranges from the Baroque of Purcell, to the joys of Haydn, the beauty of Berlioz and the modernity of Stravinsky. This programme demonstrates the wonderful virtuosity of the Ensemble’s string players. It also shows that Scotland in Karen Cargill has an opera singer of international quality. Indeed, her programme of engagements round the world is a testimony to this status.

This concert is titled Prophecy, referring to a theme inspired by tales from Ancient Greece, and is bookended by Stravinsky’s music for his ballet Apollo which tells the story of the god of music as he is visited by the muses of dance, song, mime and poetry. This is, however, melodic Stravinsky, not the violent atonality of the Rite of Spring which had the crowds in riot at its premiere in 1913. This is a much later work dating from 1927, but Stravinsky deliberately went back to melody to illustrate the muses which the ballet, choreographed by George Balanchine, displayed on the stage. The twelve players of the Scottish Ensemble, under their guest leader Matthew Truscott, bring the colourful melodies of Stravinsky to life on the stage of the Queen’s Hall to the delight of the appreciative audience.

The next work, Haydn’s Arianna a Naxos, brings Karen Cargill to the stage. Since she won the Kathleen Ferrier Award in 2002, her voice has gone from strength to strength and now is a powerful yet luscious toned instrument which delights audiences all over the world. Haydn’s version of the story of Arianna’s desertion on Naxos is one of many in the musical world, most notably Strauss’s Ariadne auf Naxos. In this version of the story, by an unknown Italian librettist, Arianna dies after going through the range of emotions in this cantata, written by Haydn for a mezzo soprano. It is a perfect vehicle for Karen Cargill to demonstrate her wonderful voice, from the slow soft reflective arias on her love for Theseus, to her final dramatic climax as she realises she has been abandoned.

After the interval Cargill demonstrates her operatic ability in Berlioz’s great opera The Trojans which she has sung at the Met and for Scottish Opera. It deals with Dido and Aeneas, as does her other aria from one of the earliest operas – Purcell’s Dido and Aeneas written in 1683. It contains one of the most famous operatic arias When I Am Laid In Earth, now known as Dido’s Lament. This is preceded by Purcell’s Fantasia for Strings and later followed by the second part of Stravinsky’s Apollo. It makes for a perfect concert.