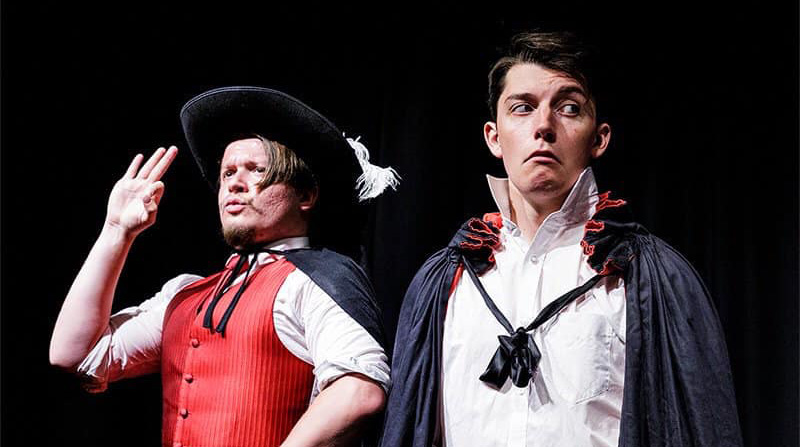 ’Tis the season to be jolly… not just at Christmas, but at any time of the year. Whether it’s Easter, Hallowe’en, April Fools’ or Burns Night, the next festive celebration is never far away. And there’s no jollier acknowledgement of that fact than this funny, fast-paced caper – which takes a genius idea and runs with it to its humorous extreme, powered by a vast array of characters and a chirpy song or two.

In the parallel universe conjured by the show, a government agency – the Department of Seasonal Mascots – supervises national merry-making from an office in Canary Wharf. The Easter Bunny, Father Christmas, Guy Fawkes… each is holed up there all year round, planning and re-planning the one day a year when they take centre stage. But this is the age of austerity – and Downing Street’s sent warning that one of the holidays will be axed. Cue a tangle of scheming and sabotage, as the rival mascots fight to ensure that they’re not the one for the chop.

The delight of Seasoned Professionals lies in its massive roster of characters, who each combine familiar tropes with something a little different and new. The posh St George keeps a dragon on a lead – though for some inexplicable reason, the mythological companion never quite makes it onto the stage. Guy Fawkes is deliciously rakish, the Easter Bunny has the sweetest little hop, and that’s before we even mention Boxing Day – the most effervescent and charismatic holiday of all. So many characters! So many costume changes! So many terrible puns.

There’s a nice variety to the humour, ranging from those groan-inducing one-liners through to slow-burning wordplay, and also including a smattering of excellent close-harmony songs. The mascots’ world has its own consistent logic: there’s a genuine sense of a shared history, and the plot twists all make perfect sense. From time to time the script gives a wink at its own slightly sketchy production values, a traditional Fringe trope that’s endearingly exploited here.

This is an excellent show, sharp and fluid, consistently entertaining and easy to enjoy. What could lift it into the five-star bracket is a little more light and shade – characters who aren’t just comic caricatures, but have just enough depth to make you care. While the script tells us their entire future is at stake, there’s little air of genuine peril, nor do we sense the pathos or poignancy that some of the storylines imply.

But here’s the most important thing: Seasoned Professionals is funny, from beginning to end.  It’s an hour devoid of anger or bitterness, and there’s absolutely no fear that they’ll punish your laughter with a secret Weighty Theme. The Fringe’s mojo rests on shows like this one, so see it – and enjoy.