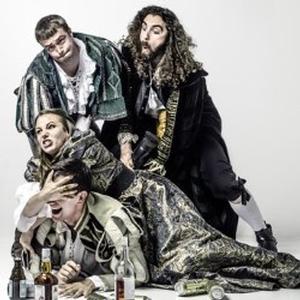 Enjoyable but uninspiring romp that does exactly what it says on the tin.

Sometimes, the simplest ideas are the most successful. Fernando Botero made an entire career out of drawing and sculpting fat people, One Direction have achieved ridiculous global success with paint-by-numbers pop tunes and the Colonel only needed 11 spices to elevate KFC to the forefront of fine fast food dining (ahem). Of course, just because they’re successful, doesn’t necessarily mean they’re innovative… or any good.

Shit-Faced Shakespeare have been resting on their drunken laurels for many years now, garnering sell-out audiences and raucous belly laughs in the process. The premise couldn’t be simpler; take one Shakespearean masterpiece, six classically-trained actors and get one of them irredeemably drunk, then sit back and watch the fireworks fly.

On this particular occasion, we’re treated to a rendition of Measure for Measure and a very inebriated young actress named Beth, playing the role of Isabella the nun. The opportunities for habit-cloaked tomfoolery are endless and the depths are duly plumbed, but in the end it all seems a little one-dimensional. Drunk people are often quite funny (see YouTube for evidence), but there’s not much here you wouldn’t get from hanging around outside your local pub. Far too much of the hilarity derives from breaking character, referring to her colleagues by their real names and swearing like a most un-Shakespearean maiden.

It’s lapped up by the packed-out crowd, many of whom have undoubtedly partaken of a few shandies themselves, and if you’re in the mood, it’s certainly an amusing way to spend an hour at the Fringe. But at base level, all that’s really taking place is a bunch of drunk people laughing at one very drunk person attempting (not very hard, it must be said) to remember her lines.

Aside from the obvious gimmick, the other actors are adept without shining, and though there are a few well-timed quips and some excellent gags transforming modern pop songs into muttered hymns, there’s nothing too impressive on show. The fact that they try to play the rest of the piece relatively straight jars with the scenes involving the drunkard, which means that in her absence it loses impetus and interest massively.

An entertaining way to round off  (or kick-start) your evening, especially if you’re feeling sufficiently lubricated yourself – but don’t expect sparks to fly or any new ground to be broken.