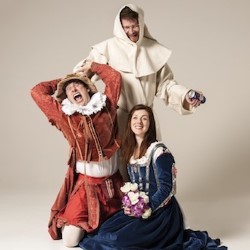 Drunken antics are not usually this funny.

The name says it all. Shit-Faced Shakespeare. A Shakespearean play where one cast member is completely hammered. In the case of this year’s Fringe run Magnificent Bastard Productions presents Romeo and Juliet, Shakespeare’s tragic love story between the son and daughter of two feuding families.

Romeo is the drunk friend we all have on a night out, the one who has a few too many, the one with all the wild antics, who ultimately is too sloshed to get all the kebab in his mouth. Still, Richard Hughes – who played Romeo on the night this reviewer saw it – manages to keep his words non-slurry and even pops out a few actual lines between sexual innuendos and attempts to run away. While the drunken antics are hilarious, one has to wonder how much is genuine inebriation and how much is hamming up for the audience. Even so, many of the misused words, character slips and enthusiastic movements are outrageously funny.

The fellow cast members somehow manage to keep mostly straight faces during raucous scenes, ad-libbing along with Hughes. At no point does the show become boring and predictable. Even if you know the story of Romeo and Juliet, there is no telling which way the steaming cast member will take it. And the rest of the cast just have to play along.

The director and founder of the concept, Lewis Ironside, keeps a close watch on the tipsy to ensure nothing dangerous happens. Indeed, the only danger is for those in the front row who are sloshed by beer fairly regularly.

Despite being entertaining and uproarious in its execution, die-hard fans of genuine Shakespeare would do best to avoid it. This is taking the piss out of Shakespeare to the extreme, but for a good night out is something to experience.