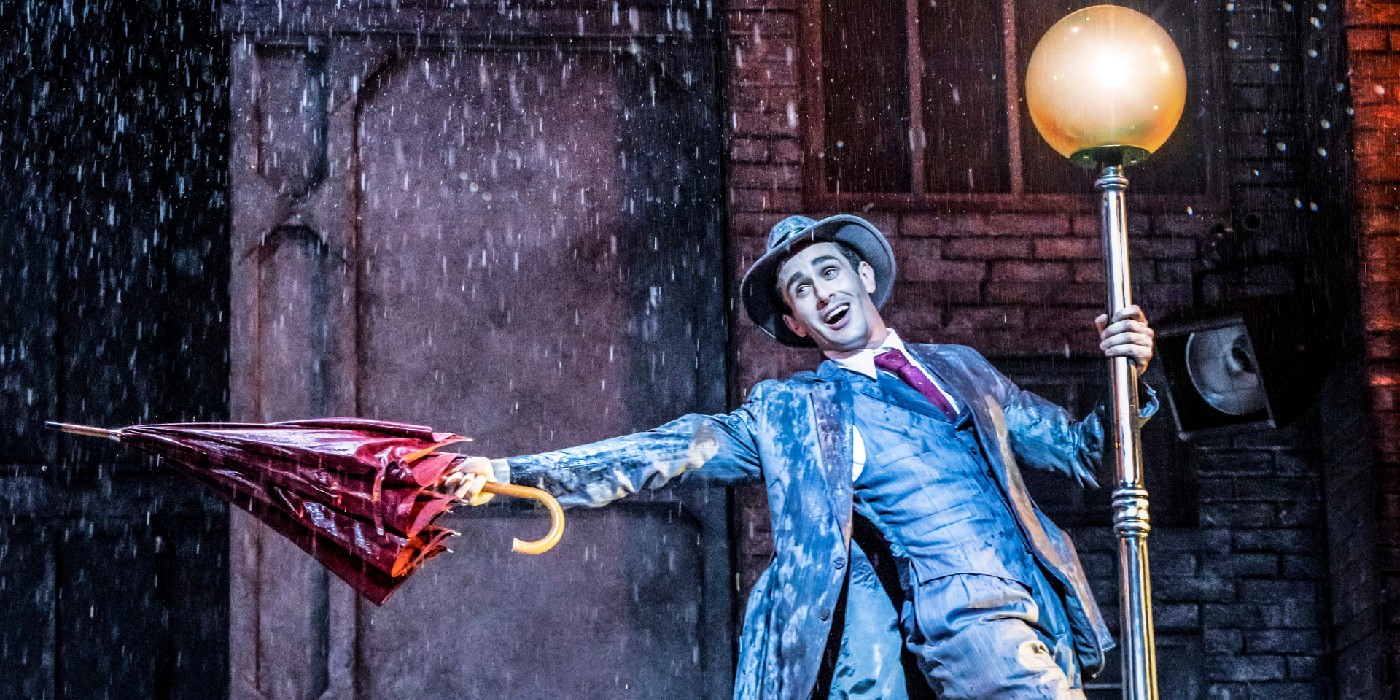 Singin' in the Rain

Singin’ In The Rain is a daft wee story that doesn’t do a whole lot for the feminist cause. But, if you grew up with the iconic film, or even if you didn’t, this production is so good-hearted and full of fun that you’ll probably forgive it.

Don Lockwood and Lina Lamont are leading lights of the silent movie world and Hollywood’s favourite ‘are they/aren’t they together’ couple in 1927. But when movie makers figure out how to sync sound and pictures, Lina Lamont’s provincial accent and daft tendencies start to cause problems. As luck would have it, Lockwood bumps into jobless actress Kathy at a bus stop. She’s smart, initially sassy, and blessed with all the vocal control (and dancing prowess) that Lamont so sorely lacks. Cue a solution for the movie maker and a sweetheart for the slightly jaded romantic lead.

For a show that’s basically cobbled together from discarded songs, this musical is dripping with crowd-pleasers. The production boasts a talented ensemble cast who excel at the large-scale musical numbers (“You Stepped Out Of A Dream”, “Good Morning”, “Beautiful Girl” and a glorious “Singin’ In The Rain” reprise as a curtain call). And Ross McLaren as Lockwood’s long-standing best friend looks like he’s having a ball during a jubilant “Make ‘Em Laugh”.

Gene Kelly leaves big galoshes to fill but Sam Lips does an impressively smooth job of charming his way through the show. McLaren is cheeky, likeable and impressively down-to-earth. Faye Tozer (a former member of Steps) comes with that ripple of audience interest that accompanies a celebrity on stage, but flings herself into this ditzy role with commendable abandon. And Charlotte Gooch, if you ignore the fact that she has do an awful lot of swooning and mooning over her newfound love, has a spark to her when she’s refusing to be seduced by Lockwood’s charm offensive – and demonstrates almost consistently lovely vocal control.

Unlike lots of big cast musicals, there are also some really fun cameos. Sandra Dickenson as the radio hostess with the mostest is suitably sultry and glamourous. Alastair Crosswell as the Dialect Coach is both great fun and a cracking dancer. And Harriet Samuel-Gray gets a deserved round of applause for her magnetic solo sequence.

This is a cracking production of a show that doesn’t feel quite so touchingly sweet as it did seventy years ago, but nonetheless, sees the good guys (and girls) get the ending they deserve. An impressive set with  gorgeous costumes (both Simon Higlett) and a multi-talented live band make for a polished piece of nostalgia that will send you on your toe-tapping way. I defy you not to whistle on your way home.