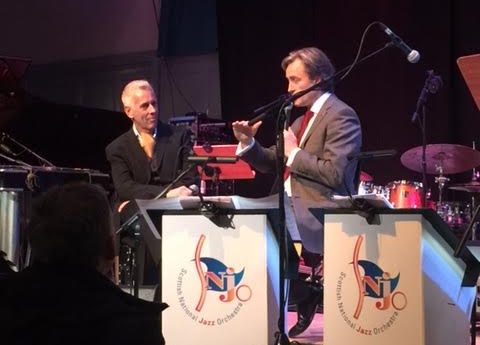 Edinburgh is blessed with not only a healthy classical and folk music life but a lively jazz scene. It has regular jazz sessions at several cafes and the Jazz Bar in Chambers St is open seven days a week.

At the peak of Scotland’s jazz scene is Tommy Smith, saxophonist, composer, arranger, teacher, and founder and leader of the Scottish National Jazz Orchestra. Not bad for a boy who grew up in Wester Hailes, one of Edinburgh’s poorest estates! Tommy Smith is 48 (but looks about 28!) and has packed a huge amount into his career, including working with his two guest artists tonight – Joe Locke, not only a wonderful vibraphone player but also a top arranger, and Kenny Washington, a wonderful jazz singer with a very flexible voice and sweet tone.

The concert features the work of two great American composers – Henry Mancini and Johnny Mandel –  arranged by Joe Locke among others. These works are well known to all, with famous songs like Moon River (Mancini) or Shadow of Your Smile (Mandel). However, with jazz arrangements they become a basis for great instrumental virtuosity and vocal dexterity, often morphing into a twenty minute elaboration of a five minute song.

The two guest artists are at the centre of most of the numbers. Locke is an amazing vibraphone player and gets the instrument to almost sing. He is complimented by the voice of Kenny Washington, a small man with a big, melodic voice. Between them they make old standards take on a new life. They also allow space for solos from Tommy Smith and other members of the Scottish National Jazz Orchestra, in particular Konrad Wiszniewski and Martin Kershaw on sax, and Alyn Cosker whose amazing drum solo is ably backed by Pete Johnstone on piano and Calum Gourlay on bass. All the orchestra are superb, with the cool figure of Tommy Smith at the helm, leading and linking to the guest artistes.

The best known works of the evening are probably Mancini’s famous score for The Pink Panther which gives rise to a virtuoso display by Joe Locke on vibraphone and evokes the memory of Peter Sellers in the movie! Also impressive is Mandel’s Suicide Is Painless, the theme tune to M*A*S*H, which Locke informs us was really about the Vietnam War but was set in the Korean War because of political sensitivity! Both of them give opportunities for solos from the talented musicians and are well received by the enthusiastic audience, sat cabaret style around tables in the intimate setting of the Queens Hall.

At the interval, I talk to an old jazz musician who is worried about succession, i.e. the development of young jazz musicians in Scotland. However, Smith, among his many other roles, heads up the Jazz course at the Royal Conservatoire in Glasgow, and there are many young jazz students from Edinburgh in the audience. On the basis of Saturday night’s concert, jazz is alive and well in Scotland.