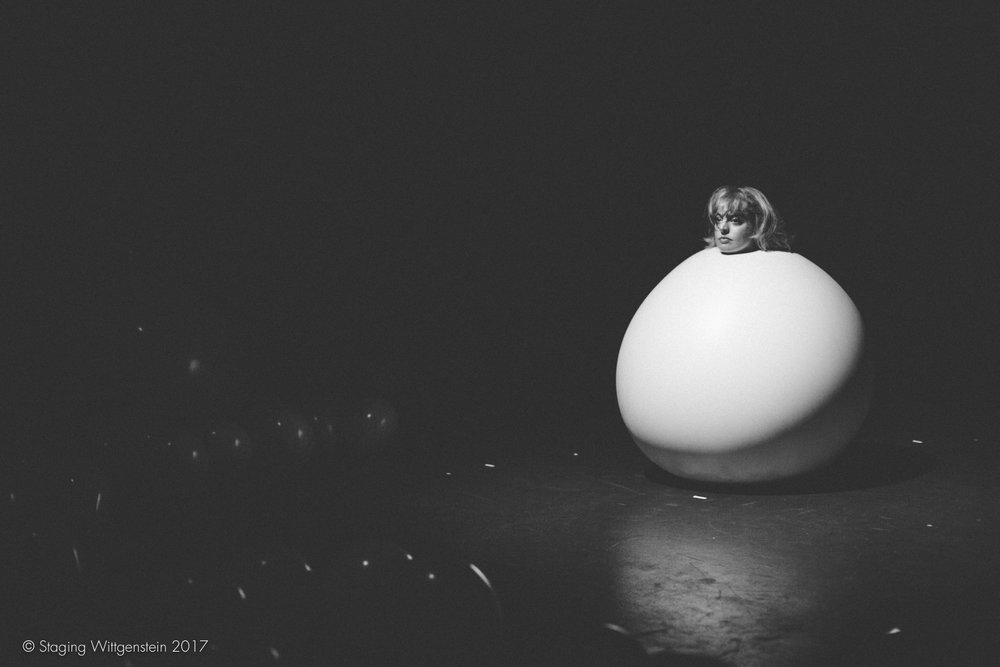 Wittgenstein's theories of language explored through physical theatre and balloons.

Ludwig Wittgenstein himself once said that, “I don’t know why we are here, but I’m pretty sure that it is not in order to enjoy ourselves“. It is ironic, then, that a play based upon his works could be so entertaining. Staging Wittgenstein, a piece devised and directed by Blair Simmons, explores some of Wittgenstein’s work through the medium of physical theatre.

A woman attaches a balloon to an automatic pump and puts her fingers in her ears. It pops, and two more women, dressed in swimsuits, jump on stage. They are each tasked with the challenge of getting into a massive white latex balloon. After helping them get into the balloons, the first woman walks off stage, and the balloon-women are left to their own devices.

This is the entire premise of the show and, though it may sound simplistic, it is executed in a flawless manner. After the first pop, the audience is on edge for the rest of the performance, unable to relax even when the women seem completely comfortable and at ease in their balloons. This sense of unease is heightened when they are trying to re-fill each others’ balloons without using English to communicate, opting instead for a guttural language which just about conveys their meaning through intonation and increasingly frustrated yelling.

The combination of physical and linguistic restrictions placed on the two women makes for a simultaneously frustrating and amusing show, and one which Simmons claims is different every night. It is bizarre in the extreme, and raises interesting questions about the nature of communication in our ever-changing world. The way the women embrace the fact that often the play will veer off course due to the volatile nature of the balloons only serves to make it better; their ability to keep the audience interested while attempting to re-fill one balloon four times is in itself a testament to their skill. It may not be the most accessible of shows, but it is most definitely a unique experience.