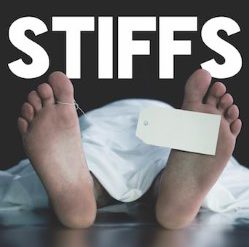 Marcus and Wilhelm bring fun and farce to the Fringe.

Two stiffs wake up in a morgue with no idea where they are and no memory of what went before. In a laddish sort of a way, the two guys then slowly figure out what might have happened to bring them here and there’s a good deal of banter and argy-bargy along the way.

The company was set up in 2017 by students from Barnsley, Mark Olzsewski and William Batty. Billed as “absurdist comedy”,  Stiffs by Marcus and Wilhelm is part of the Death on the Fringe series and it does not have a complicated plot, nothing much to get your head around, rather this is simple, fun Fringe theatre played for laughs.

Or is it? The “absurd” part is a nod towards theatre which enquires into the meaning of human existence, and comes to the conclusion that it really has no purpose, with the result that communication breaks down. Here, on the surface of it, the writers seek for the silly, but because their protagonists have no way of actually discovering their true backstories, what was initially a slow unfolding of the truth, turns out to be a play of only one possibility. The final scene, though simplistic, hints at the endless repetition of options, with no guarantee of any final or “true” understanding of why we are all here on this earth doing this stuff and going to shows in Edinburgh in the first place. But you’ve got to laugh!

Set in one of Edinburgh’s temporary but well-run theatres with audience on three sides, the performers do very well in opening up so everyone can see. In fact, overall, this new company have a very open style of performing – confident, bright and pretty slick.

Sandra from the service station is an amusing excerpt with apt gestures, expression and nuance but
the script is patchy, giving the characters, especially the one we mostly know as Vince, variable personalities ranging in his case from the erudite, using terms like “logistically speaking” and “recoup myself”, to the banal “I ain’t done nuffin never”. This isn’t absurd, it’s inconsistent writing.