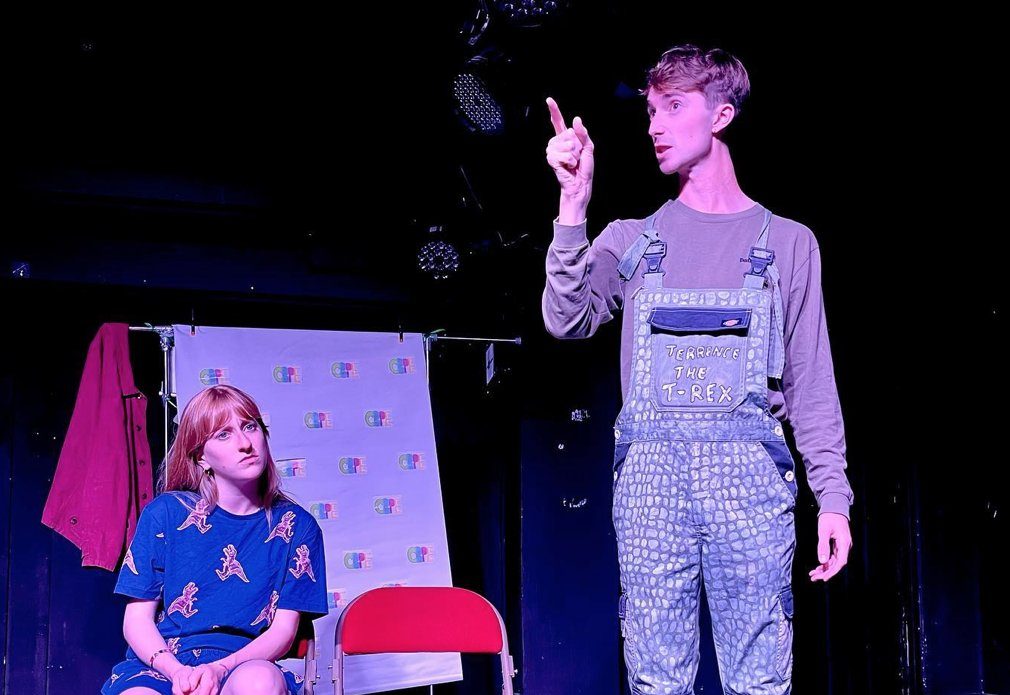 the kind of surprise find the Fringe is all about

The rousing soundtrack to Jurassic Park welcomes us to Paradise in the Vault. However, the juxtaposition with handmade letters – Terra the T-Rex – hanging from string on stage lets us know we’re in for a bit of farce. Terrence the T-Rex is a comedy duologue between two children’s party entertainers: the eponymous Terrence and newcomer Sarah or ‘Tri-Sarah-tops’. When Sarah is sent by the party agency to gatecrash Terrence’s gig and team up with him against his will, sparks and jokes fly.

The opening act works perfectly – a fast-paced tête-à-tête in front of a bunch of seven year-olds (us) with plenty of wordplay and quick wit. As they squabble over the minutiae of dinosaur facts, the daftness increases and it’s great in its ridiculousness. Clara Wessely is fantastic as sarcastic, dry-humoured Sarah while Alex Zawalnyski, who also wrote the play, is perfect in his leading role as neurotic and excitable Terrence. Combined, their dynamic is fertile ground for conflict and gags and their clash of personalities is key to the play’s success, providing plenty of hilarious arguments as well as creating opportunities for heartfelt moments and an arc for their relationship.

Beyond the open act, the story expands and we discover new layers beneath the party act. Terrence is insecure and has a tricky romantic past with a popular rival entertainer, Daphne the Diplodocus. Sarah, too, has her own complicated backstory, as the daughter of a legendary kids celebrity act, a shadow she is desperate to remove herself rom. None of this is ever too weighty or maudlin though. It simply gives more depth to the characters and allows us to invest beyond the the dino jokes.

Terrence the T-Rex eventually becomes more than the sum of its parts – a play about finding your way and adapting to change. It’s a funny, sweet anti-romcom with a winning pair of performers. This is the kind of surprise find the Fringe is all about.