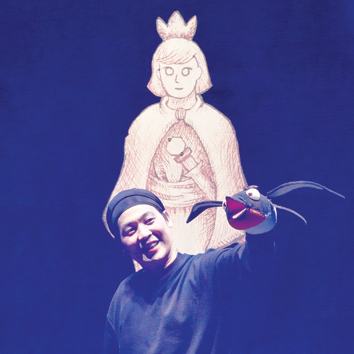 A sometimes puzzling reinterpretation of a children's classic story

Tucked away at the top of C Aquila (Roman Eagle Lodge) is a mysterious stranger. Living on the street amidst a clutter of rubbish and a few precious personal possessions, he finds a storybook that tells Oscar Wilde’s famous tale of The Happy Prince. Modl Theatre has come from Korea to bring their contemporary reimagining of this children’s classic to Edinburgh Fringe audiences in this world premiere.

Four actors and a mix of puppets, projections onto the simple set and live animation are deployed in the storytelling. The actors speak in a mix of English and Chinese. Already on the fringes of society, the divide between the mysterious stranger, the poor student (JoonYeon Na) and the mother (EunMee Park) who can’t feed her child is further reinforced by the use of languages that the audiences won’t recognise when the show transfers to Korea.

There are some nice touches in this show. The mysterious stranger (JungJin Heo) mixing together the fetid dregs from a collection of plastic water bottles when he awakes in the morning, drinking it and then rubbing the remainder on his eyes to wake himself up. The Pinocchio snow globe that plays When You Wish Upon A Star when wound up. The puppet swallow and the robot prince. A soundtrack that ranges from Mozart’s Requiem to Greensleeves.

But partly because of the language barrier (for this non-Chinese speaking audience member) and partly because the show is a riff on the original story, it’s sometimes tricky to work out what’s going on. The Man With A Baseball Bat (Minsoo Jo) is a particular puzzle. He attacks the mysterious stranger’s shelter and then disappears again. A pre-recorded voiceover is used to narrate the original story but it sounds more like Amazon’s Alexa than a piece of theatre. The acts of kindness veer from Happy Prince-esque hurling of rubies at the impoverished to the hurling of music at the miserable student but all are executed in such a perfunctory manner that much of the charm in the original story is lost.

This is a children’s show and certainly, the three pretty small children in the audience sat quietly enough for 45 minutes. Some of the cultural nuances are possibly literally lost in translation. But the reimagining in this instance has taken a story brimming with heart and heartache and in a quest to make it relevant, director JungJin Heo has struggled to keep sight of the lengths that we will go for love.