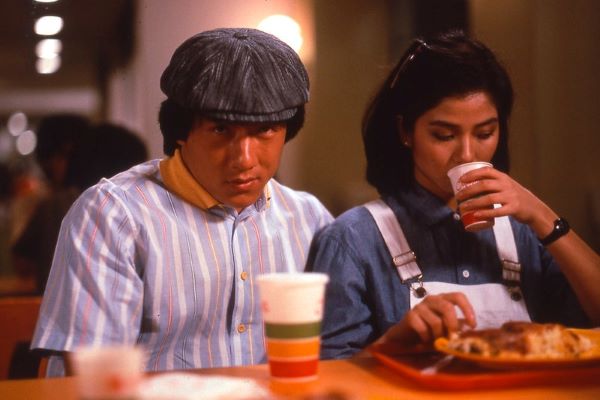 Over the course of seven films and 13 years, the Lucky Stars films combined action and comedy, showcasing an exorbitant array of talent. The first three films were directed by the great Sammo Hung, one of the most famous of the martial arts stars of the ’80s and ’90s. They find the actor as part of a revolving five piece of comedy performers loosely who end up in any number of escapades that are either refreshingly un-PC, or borderline rapey horseshit depending on your stance on comedy.

The first, and strongest, film Winners & Sinners establishes the formula. Five ex-cons (Hung, John Sham, Richard Ng, Charlie Chin, and Stanley Sui-Fan Fung) set up a cleaning company, along with Sham’s sister Cherie Chung. In between bouts of pranks at each other’s expense, and periodic attempts to cop off with the long-suffering Chung, they find themselves embroiled in a Triad turf war. The five help/hinder Jackie Chan‘s no-nonsense policeman along the way. The following films, My Lucky Stars and Twinkle, Twinkle, Lucky Stars sees similar scenarios, but with different character names, and Sham and Chin swapped out for Eric Tsang and Kiu Wai Miu. The locations change, and the likes of Sibelle Hu and Rosamund Kwan line up to get harassed by our heroes.

One thing shines through on all three films: Sammo Hung is a great director of action, but a terrible director of comedy. This is a shame, as the trilogy is weighted firmly towards the Lucky Stars’ bawdy slapstick action. Imagine The Three Stooges, except that there are five of them, and they’re all sex pests. It’s baffling how badly the two aspects fit together. Across the entire collection, there appears to be two different movies taking place. It should be a fool-proof formula given Chan’s willingness to play the clown across his career, and the disconnect between Hung’s astonishing athleticism and his relatively bulky physique. But somehow the comedy and action refuses to coalesce smoothly.

What this means is that for every great set-piece like a vehicular pileup to rival The Blues Brothers, and a spectacular chase through a haunted house at a Japanese fairground, there are interminable sections of bullying banter and juvenile schemes in which middle-aged men try to get a glimpse of young women naked. Chung, Hu, Kwan, and various other actors all hold their own – the actions of the group are never framed as anything other than desperate and pervy – but the schtick gets old very, very quickly. The returns diminish even further by the second film, which adds an unbearable Eric Stang performance. His character is not only the butt of most of the groups increasingly spiteful humour, but it’s implied that he may have learning difficulties (he refers to himself as a ‘retard’ at one point). This adds yet another layer of distaste on top of a pretty sour cake.

Yet the action goes at least some way to redeeming things. Chan, Hung, and Yuen Biao (in fleeting appearances across the trilogy) are in phenomenal form. The fight scenes are inventive, fast-paced, and funny in ways that the intended comedy stubbornly fails to be. What is always refreshing in Hung and Chan’s work is their relative lack of ego; they’re happy to take a fall, get hurt, and appear less than godlike in their abilities (which only the truly talented tend to do). This is put to great effect here and they’re put through some pretty brutal paces, as are the countless stuntmen who are landing very hard.

It would defeat the purpose of the trilogy to keep the superb action and strip out the comedy, even though the two gel like oil and water. The question is, how much chaff are you willing to sift through for some sparse, but high-grade wheat? In truth, you’re better seeking out Eureka’s other peak Jackie Chan releases like Drunken Master and Project A. That’s the really good stuff.