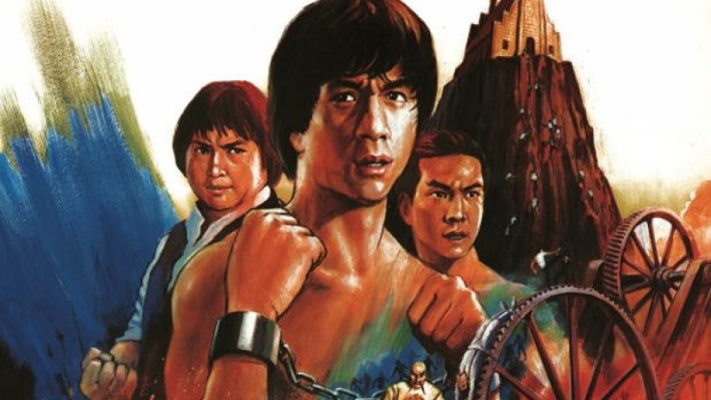 Jackie Chan was already a major player by the time he stepped behind the camera for the ebullient, madcap Project A, well on his way to mega-stardom in Asia, and with a burgeoning cult kudos in the West thanks to the likes of Drunken Master and his appearance in Cannonball Run.  Having worked with and learned from the likes of the legendary Yuen Woo-Ping, he delivered an exceptionally fast-paced, bright and breezy caper that brought him an even bigger army of fans.

Dragon Ma (Chan) is part of the Hong Kong Marine Police at the turn of the 20th century, tasked with stopping the activities of a ruthless gang of pirates.  When two ships in their dwindling fleet are blown up the service is scuppered and Ma joins the Police, with whom the Marines have had a traditionally fractious relationship.  Along the way he teams up with shady wheeler dealer Fei (Sammo Hung) and policeman Hong (Yuen Biao) and hatch a plan to take down the pirates.

Project A marked the moment where Chan really achieved the strange alchemy between traditional martial arts movies and the western slapstick he loves so much.  His sharp, staccato brand of kung fu was adopted as a deliberate stylistic counterpoint to his early contemporary Bruce Lee, and also curiously mimics the twitchy frame rate of the silent comedy legends Chan sought to emulate.  This is especially evident in the riotous bar brawl scene early in the film, and the manic bicycle chase through the streets of Hong Kong which ends with Chan dangling from a clock face in a loving homage to/ blatant steal from Harold Lloyd‘s Safety Last.

It’s true that the plot of Project A is as flimsy as the canopies through which Chan plunges in the film’s most famous stunt, but this is all about fun.  Chan barely spends a single minute of exposition in the opening scene before hurling us into the action in a blaze of pummelling and pratfalls.   Even 35 years on, and with the likes of Iron Monkey, Crouching Tiger and The Raid films all raising the bar in terms of martial arts over the decades, the stunts still amaze and delight.  Chan at 29 years-old was not only a spectacular athlete, but also had a great eye for composition.  His storytelling is haphazard, but even at their most chaotic the fights are clear, easy to follow and tightly edited.  He’s also a generous leading man, allowing fellow legends Hung and Yuen their chance to shine.

Project A does tail off a little towards the end with a needles Benny Hill-style romp of disguises and general running about, but pulls it back together for a satisfying and explosive finale against a ridiculously buff Dick Wei as the chief pirate.  Hugely inventive and genuinely hilarious in places, it’s the sheer essence of what Chan is about as a filmmaker and star.  Project A 2 is more of the same, but noone is likely to take too much issue with that.